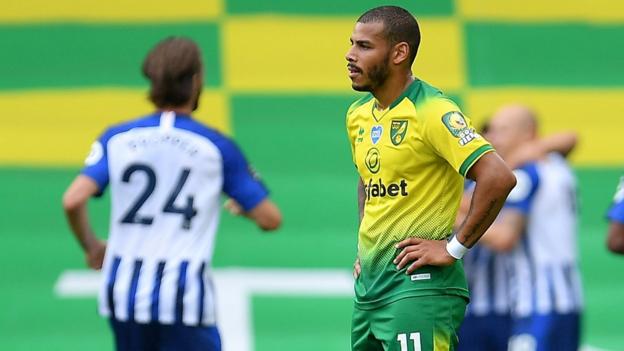 Leandro Trossard’s winner nudged Norwich City closer to relegation as Brighton all but ensured a fourth straight season in the Premier League with a rare away win.

Nineteen-year-old substitute Adam Idah was denied an equaliser when he headed against the post in stoppage time.

Norwich remain bottom of the table, seven points from safety with five games left, while Brighton’s third away win of the season lifts them nine points above the relegation zone.

This was a must-win game if Norwich were to revive their fading hopes of staying in the Premier League. Instead they fell to a fifth straight league defeat without scoring.

They can still reach 36 points, and 17th-placed Watford have 28 points. But it is hard to see where their next goal – never mind win – is going to come from.

This was the first of three successive matches against teams in or just above the relegation zone yet Farke opted to start without Pukki and Cantwell for his side’s fifth match in 15 days.

Finland forward Pukki has scored 11 of his team’s 25 league goals this season, but none in his past 10 league and cup games, while midfielder Cantwell has also chipped in with some key goals, including efforts against Manchester City, Arsenal and Wolves.

Farke said the changes were to freshen up the side after an error-ridden 4-0 midweek defeat at Arsenal but there was a distinct familiarity to the way his team huffed and puffed without creating much.

Cuban forward Onel Hernandez was lively without testing keeper Mat Ryan, while Republic of Ireland Under-21 forward Idah was only denied by a post in the dying moments.

In two of their final three games before football was suspended because of the coronavirus pandemic, Norwich beat Leicester in the Premier League and Tottenham on penalties in the FA Cup.

Since the restart, they have failed to register a single point and are going backwards.

While Norwich have faltered since the restart, Brighton have thrived.

The Seagulls were just two points above the relegation zone when the season was suspended. They are now nine points clear of 18th-placed Aston Villa and 19th-placed Bournemouth, both on 27 points.

Graham Potter’s side have reached 36 points – a tally that has been good enough to stay up for the past three seasons – with five games to go, meaning the pressure of hosting champions Liverpool and second-placed Manchester City in back-to-back fixtures is eased considerably.

Brighton carved out more and better openings than their hosts, the move for Trossard’s composed finish coming straight off the training ground. Yet once again they impressed especially at the back.

With Lewis Dunk and Adam Webster dominant at the centre of defence, they came away with an eighth clean sheet of the season and are now unbeaten in five straight league away games.

And despite 11 places separating the two sides in the table, Brighton have conceded only as many goals – 44 – as fourth-placed Chelsea.

The games are coming thick and fast – Norwich are away at fellow strugglers Watford on Tuesday (18:00 BST), while Brighton host champions Liverpool on Wednesday (20:15 BST).