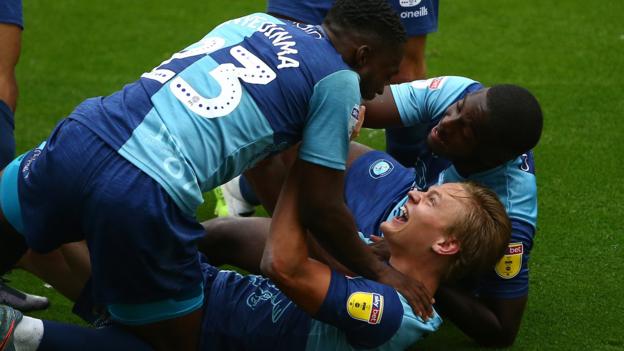 A breathtaking first half at Highbury Stadium also contained a missed Wanderers penalty after Fleetwood’s Lewis Coyle was sent off for a reckless challenge on Jacobson before David Wheeler made it 3-1 at the break.

Cairns saved Jacobson’s spot-kick midway through the first half but was at fault again after the break when he spilled a high ball into the path of Alex Samuel, who was left with a simple finish to extend the away side’s advantage.

Fleetwood managed to keep the score at 4-1 as they closed out the final 30 minutes, but were reduced to nine men late on when Paddy Madden was shown two yellow cards for a dive followed by dissent.

Wycombe now seem all but certain to go through to play either Portsmouth or Oxford United in the final at Wembley on Monday, 13 July, with the second leg taking place at Adams Park on Monday.

Wycombe were the main beneficiaries of the decision to curtail the League One season early last month amid the coronavirus pandemic.

Gareth Ainsworth’s side moved from eighth to third, knocking Peterborough out of the top six, as the final table was worked out using average points per game.

Barring an extraordinary turnaround in the second leg, the Buckinghamshire club will now have a chance to climb into the second tier of English football for the first time in their history.

Despite Wycombe’s last match being on 29 February before all football was halted in mid-March, they showed little rustiness and dominated from start to finish – aided by Fleetwood mistakes.

The tone was set by 20-year-old Ofoborh with little more than a minute gone as he drove in first time from 20 yards.

Evans levelled things from the spot after Wanderers goalkeeper Ryan Allsop nudged over Lewis Gibson, although that soft penalty was as good as it got for Joey Barton’s men.

Is the Fleetwood dream over?

Fleetwood were still plying their trade in England’s ninth tier in 2005, but a remarkable rise saw them climb into League One less than a decade later.

However, their chances of stepping up into the Championship next season now appear to be over.

Costly errors, not only from goalkeeper Cairns, but Coyle’s lunge at Jacobson in the box and Madden’s foul language towards the assistant referee contributed to their demise.

In contrast, Wycombe were excellent on the ball and clinical in front of goal and have taken a huge stride towards the play-off final.