England Tests could include coronavirus replacements 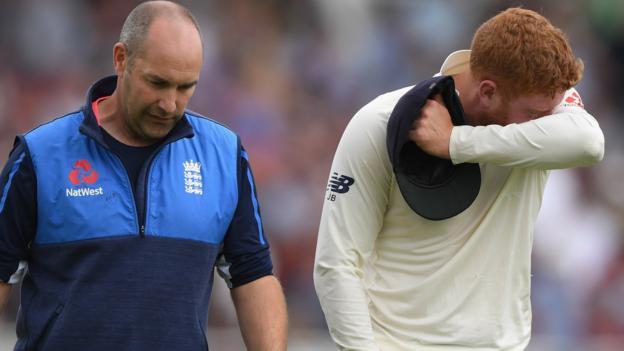 Coronavirus replacements could be allowed in England’s summer Test series against West Indies and Pakistan.

The England and Wales Cricket Board (ECB) is in talks with the International Cricket Council (ICC) over changes to the playing conditions.

This month the ICC revealed plans to ban the use of saliva to shine the ball amid the coronavirus pandemic.

Currently, the only reason a player can be replaced in a match is for suffering a concussion.

For all other injuries and illnesses, a substitute fielder may be permitted, but that player cannot bat or bowl.

The change would apply to Test cricket, but not one-day and Twenty20 internationals.

ECB director of events Steve Elworthy said: “There are still some considerations from an ICC perspective about a Covid-19 replacement. That still needs to be agreed.

“I would hope that would be in place well before the Test series starts in July.”

The ECB was due to announce details of a revamped summer schedule on Friday, although that has been delayed until Monday at the earliest.

With all cricket in the UK shut down until at least 1 July, England’s three-Test series against West Indies, originally scheduled for June, has been postponed.

That is likely to be the first part of the new programme, followed by one-day internationals against Ireland and a tour by Pakistan, all behind closed doors in a bio-secure environment.

“From a planning point of view, we have got everything in place,” said Elworthy. “We’re ready for it, but clearly we don’t want to stray outside of government guidelines and government decision-making.”

England have named a group of 55 that have been asked to return to training, including 14 uncapped players.