No celebrations but Burundi league to go on until virus spreads 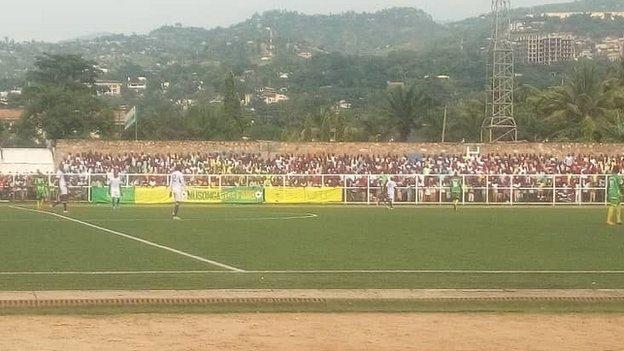 Burundi’s football federation (FFB) says domestic competition will continue until coronavirus spreads, after introducing fresh measures in a bid to finish the season amidst the pandemic.

The FFB decided to continue the season after a meeting with clubs on Sunday, whereupon players were told not to celebrate goals together and to keep their distance from referees.

In addition, players have been instructed to wash their hands before a match and to not shake hands with officials or other players.

“If there are signs of the virus spreading, we will stop the championship,” FFB president Ndikuriyo Reverien told BBC Sport Africa.

“We are going to play and at the same time we will constantly stay in touch with the Health Ministry.”

There are three rounds of games remaining in the current season in the east African nation, where three people out of a population of just over 10 million have tested positive for Covid-19 so far.

“Until now, the three identified cases and all the people who have been in contact with them are geographically located and monitored by the Health Ministry,” added Reverien, a politician who also presides over the Senate of Burundi.

“We know that in many countries the health situation is catastrophic, but here we have two cases which came in from abroad and one case of local contamination (that person was living with one of the two).”

“We don’t see the use in stopping when all activities in the country are still going on as usual.”

Unlike many other nations affected by coronavirus, Burundi has yet to introduce social distancing.

The country is one of only four in the world – along with Belarus, Nicaragua and Tajikistan – where formal league football continues to be played, with all 16 first division teams in action over the weekend.

Although global sport has suffered a widespread shutdown because of the outbreak, the FFB decided to play on after the country’s health minister also attended Sunday’s meeting in Bujumbura.

“After consultation with Public Health Minister Thaddeus Ndikumana, the general assembly decided that the first and second division championships should continue to be played while observing the appropriate hygiene measures,” said the FFB in a statement.

Players have been asked to wash hands before kick-off, not shake hands and stay clear of referees in the hope of avoiding any possible transmission but how this aim will also be achieved while they play a contact sport is unclear.

Reverien says the number of spectators at games will be reduced, although the tally has yet to be determined.

“We are going to take a decision on the number of spectators,” he said. “We are waiting until Friday for the ministry to give us the health situation regarding the spread of the virus.”

The ‘Primus Ligue’ being one of so few leagues still in operation means that football in Burundi, who contested their first Africa Cup of Nations last year, is attracting unprecedented global interest, much of it from online gamblers.

“I don’t normally bet these leagues – Belarus, Burundi and Nicaragua – but we’re just doing this for entertainment while the other leagues are on hiatus,” said one such punter.

The local championship has no sponsor, says Reverien.

He says the league is set to resume for round 28 of 30 on 18-19 April, with a cup replay scheduled for next weekend when a quarter-final clash between Musongati and Vital’O could attract a crowd of 12,000.

Vital’O, the only Burundian side to ever reach an African club final (in 1972), are the record 20-time champions of Burundi but off the pace in the league.

Musongati – with a game in hand – are four points off the league leaders, 2018 champions Le Messager Ngozi, with three rounds to play.