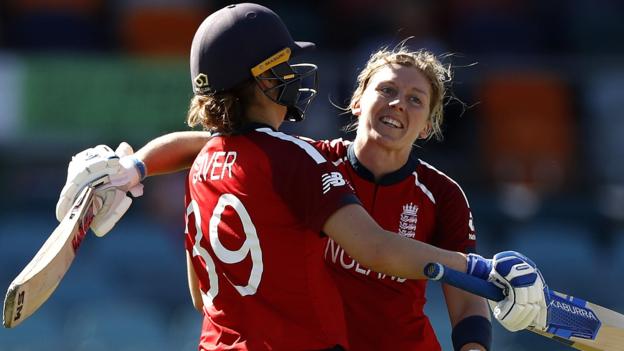 Knight’s unbeaten 108 from 66 balls, and Natalie Sciver’s 59 not out, helped England recover from a dreadful start that saw them fall to 7-2.

Thailand collapsed to 78-7 in their 20 overs as they suffered consecutive losses in their global tournament debut.

This was a good win for England after they lost their opening Group B match to South Africa.

It will also help boost their net run-rate, which could be crucial as the tournament develops.

Knight is now the only female player – and the first England player – to hit a century in Test, one-day and T20 cricket.

It was a real captain’s innings, leading from the front when her side tripped up after being asked to bat first.

Amy Jones fell to the second ball of the innings, stumped as she came forward to Nattaya Boochatham, before Danni Wyatt hoicked her first delivery to the cover fielder.

But Knight and Sciver, so often England’s key players, were composed at the crease. Sciver counter-attacked first, driving beautifully, before Knight hit out.

She hit 13 fours and four sixes – the highlight a thunderous sweep over fine leg – and she and Sciver rotated the strike well to keep the run-rate accelerating.

Knight brought up her century with three balls remaining, raising her arms to the ground in celebration, before slapping the next delivery over long-on for yet another six.

For Sciver, it was a third half-century in four innings. For Knight, it was a statement of intent about what she expects from herself during this World Cup.

It was ultimately a routine win – Thailand never really got going with the bat – but England’s fielding, in particular, was improved from their opening loss to South Africa.

The wickets were shared around, with 3-21 for seamer Anya Shrubsole, and Sciver claiming 2-5 from her two overs.

The batting was where the gulf between the two sides really showed. Thailand could not find the boundary or rotate the strike, getting bogged down by the spinners, and the pressure ultimately told.

For England, there will be sterner tests but, after a chastening opening loss, runs for Knight and Sciver will be a welcome boost for the side.