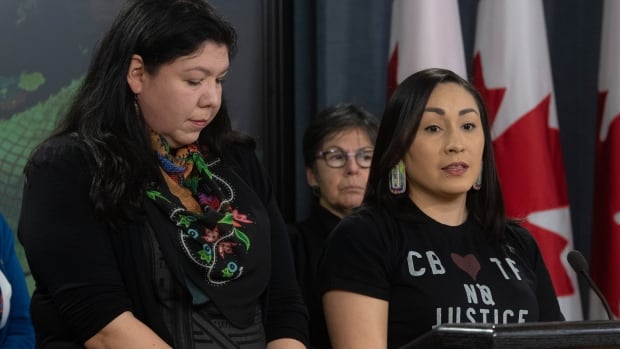 Members of parliament were invited to a screening of nîpawistamâsowin: We Will Stand Up, a documentary about Colten Boushie, in Ottawa on Tuesday night.

Boushie, a member of the Red Pheasant Cree Nation, died of a gunshot wound after he and a group of friends drove onto the property of farmer Gerald Stanley on August 2016.

Boushie’s cousin, Jade Tootoosis, has been advocating for changes to Canada’s criminal justice system since Stanley was acquitted of a murder charge in the case.

Tootoosis was in Ottawa for the screening, along with filmmaker Tasha Hubbard.

“We are here to advocate for tools for significant changes to address the systemic racism embedded in Canada’s legal systems,” Tootoosis said.

What has been done since we were here? Commitments were made at that time. It’s been two years and we haven’t been followed up with.

The visit to Ottawa is a circling-back of sorts. Tootoosis and other members of Boushie’s family took the same concerns to politicians at meetings in 2018, but Tootoosis said the family hasn’t received adequate follow-up from officials in the two years since.

Tootoosis said she has one main question she wants politicians to answer during her visit.

“What has been done since we were here? Commitments were made at that time. It’s been two years and we haven’t been followed up with,” she said. “We have to come back here and ask ‘what are you doing?’ Because that’s a question that gets asked constantly. My family and I continue to do the work. We continue to speak out and stand up.”

Prime Minister Justin Trudeau was one of Tootoosis’s targets. She said she met with him Tuesday to express her frustrations with the lack of federal outreach.

“He did apologize and commit to staying in communications with my family,” Tootoosis said. “Once again, we’ll just have to see what comes of that in time. But definitely my family will be holding him to account.”

Tasha Hubbard, the filmmaker behind nîpawistamâsowin, said members from each of the federal parties were in attendance at the documentary screening, but that the crowd was smaller than they’d hoped.

“We were disappointed in the empty seats that were in the room,” she said. “We do know that there are things that come up in the evening. However, we had hoped to see more people.”

Hubbard said the response from the politicians who did attend was positive. She said one MP came up to her after and said the documentary helped shift their thinking.