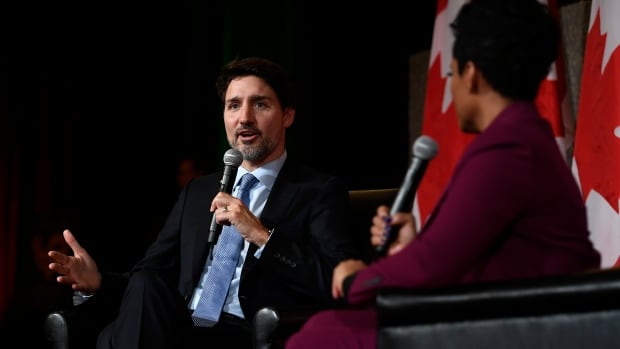 Justin Trudeau acknowledged his own past history of unconscious racism during a celebration Monday of Black History Month.

The prime minister reflected on the “dumb choices” he made when he donned blackface and brownface multiple times in his younger days.

Photos and a video of Trudeau wearing makeup to darken his skin surfaced during last fall’s election campaign, rocking the Liberal campaign and forcing Trudeau to profusely and repeatedly apologize for behaviour he said he didn’t realize at the time was wrong, but which he belatedly acknowledged was “a racist thing to do.”

On Monday, Trudeau raised the embarrassing disclosure of the photos in a question-and-answer session with broadcast journalist Marci Ien during an evening reception celebrating Canada’s black community.

Prime Minister Justin Trudeau says the infamous ‘blackface’ incident during the last federal election led him to take a ‘hard look’ at the ‘dumb choices’ he made when he was younger. 3:54

“For me, taking that hard look certainly came to a head last fall during the election campaign and reflection on my own choices of many years ago and how that actually hurt people today, that I had made really dumb choices that I didn’t understand the consequence for.”

Trudeau said it has prompted him to “be even more committed to standing with this community and fighting every day against the barriers and discrimination that are so invisible to so many people.”

Ien noted that many people thought Trudeau didn’t deserve a second chance after the photos were revealed, that he was an adult in at least one of the photos — dressed as Aladdin at a 2001 costume party at a private school where he was working as a 29-year-old teacher — and should have known better.

Trudeau said he experienced “a moment of deep disappointment” in himself when he realized that he’d “really hurt” people who considered him an ally in the fight against racism.

But he said black leaders across the country encouraged him to turn the mortifying disclosure into something positive for race relations in Canada.

“It will be on my shoulders because that is part of my story now, to make sure that I can then say, ‘This is what we kept working on, this is what we kept doing and this is how we as a team, as a government and me as an individual is working to make sure that … these barriers and this anti-black racism that still exists is directly addressed and minimized across this country for future generations.”‘

After his remarks, Trudeau received a standing ovation from the several hundred people in the predominantly black audience.

He was mobbed afterwards by people wanting to shake his hand and take selfies with him.