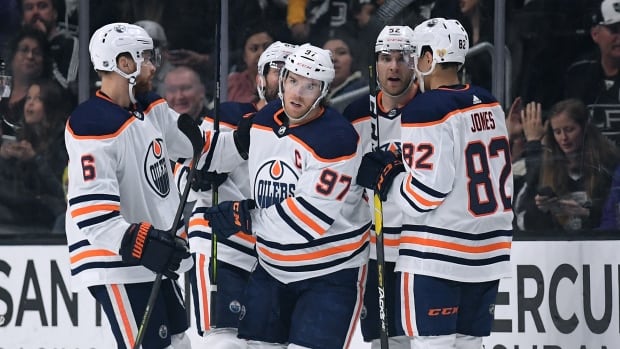 Connor McDavid had a goal and two assists in his return after missing six games because of a quad injury and the Edmonton Oilers beat the Los Angeles Kings 4-2 Sunday night.

Leon Draisaitl scored on the power play, Ryan Nugent-Hopkins had a goal and Edmonton moved ahead of idle Vancouver into second place in the Pacific Division. Mike Smith made 21 saves.

Anze Kopitar had a power-play goal, Dustin Brown also scored and Calvin Petersen made 27 saves for the Kings, who have lost three of four.

McDavid, who was injured against Nashville on Feb. 8, scored on an odd-man rush at 16:14 of the second period before Kopitar pulled the Kings within 3-1 at 18:39.

Brown scored 49 seconds into the third period by beating Smith to the short glove side with a wrist shot from the right circle.

Josh Archibald scored for Edmonton into at empty net with 50 seconds remaining.

The Oilers went in front 1-0 at 19:29 of the first period when Draisaitl scored his fourth goal in the past five games. Brown failed to clear the puck as an Oilers penalty was about to expire, and Draisaitl got to the right circle to bury a one-timer from McDavid for his 36th goal.

Nugent-Hopkins tipped Caleb Jones’ shot off his thigh for a 2-0 lead at 5:27 of the second period. Nugent-Hopkins has three goals and two assists during a three-game point streak.