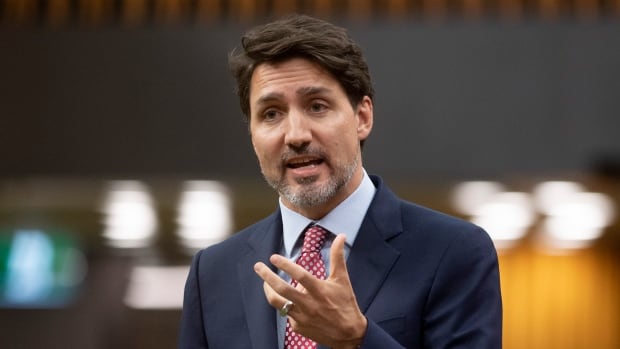 Prime Minister Justin Trudeau is huddled with key cabinet ministers in Ottawa this morning as the government looks for a way to end a rail blockade that has gone on for more than two weeks with no clear end in sight.

Trudeau has maintained that dialogue with Indigenous protesters behind the blockade is the best way to peacefully resolve the impasse but patience is wearing thin with premiers, the business community and members of his own Liberal caucus.

“We are gathering the incident response group this morning to continue discussions, negotiations. Dialogue is continuing hour by hour. I will have more to say this afternoon at the National Press Theatre,” Trudeau said on his way into the Prime Minister’s Office in Ottawa.

Trudeau will hold a news conference at 2:30 p.m. ET. CBCNews.ca will carry it live.

Requests by Crown-Indigenous Relations Minister Carolyn Bennett to meet with Wet’suwet’en hereditary chiefs, whose opposition to the Coastal GasLink pipeline inspired other Indigenous groups to protest in solidarity, have gone unanswered.

Asked Friday if the Wet’suwet’en hereditary chiefs had responded to an offer from the B.C. RCMP to pull back officers from their traditional territory, Public Safety Minister Bill Blair said he couldn’t comment.

“We know that we still have a great deal of work to do, we’re doing that work and we very much recognize the importance and the urgency of resolving this as quickly as possible,” Blair said on his way into the incident response group meeting.

The Mohawk protesters in Tyendinaga had said they would continue their blockade of the CN Rail line near Belleville, Ont., until the RCMP abandons its temporary detachment on Wet’suwet’en land. The B.C. RCMP has said it will move its operations to nearby Houston, B.C., as long as the hereditary chiefs guarantee free access to Morice West Forest Service Road, a public road used by construction crews building the Coastal GasLink pipeline.

On a call with premiers late Thursday, Trudeau was told Ottawa needs to resolve this quickly or risk a backlash from counter-protesters and vigilantes determined to put an end to Indigenous demonstrations that have snarled the flow of goods and people.

The protests have forced 1,500 railway workers temporarily out of a job and disrupted the transport of food, farm products, consumer goods and essential items like chlorine for water and propane for home heating.