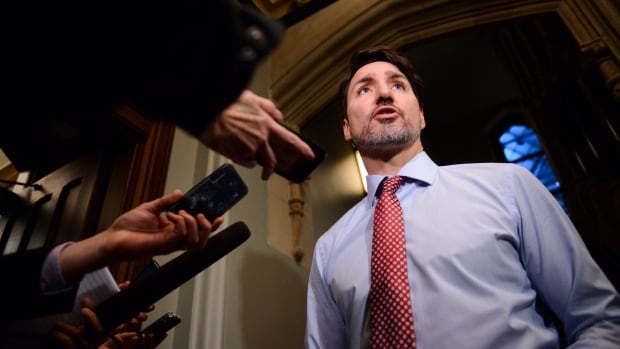 Trudeau and his cabinet huddled in Ottawa this morning to chart a path forward as the blockades hit their two-week mark.

“We’re working very hard to end the blockades. It’s an unacceptable situation,” said the prime minister ahead of a meeting with his cabinet on Thursday.

Saskatchewan Premier Scott Moe and Quebec Premier François Legault have accused Ottawa of being too slow to act on the illegal blockades. Trudeau has agreed to take part in a teleconference call with the Council of the Federation later Thursday.

“The government has been engaging directly with provincial governments since the very beginning of this situation. This evening, the prime minister will again engage with premiers … to continue working together toward a peaceful & lasting resolution,” a spokesperson for Trudeau said.

Crown-Indigenous Relations Minister Carolyn Bennett sent a letter Wednesday offering to meet with the Wet’suwet’en hereditary chiefs in Smithers, B.C., as early as today. That meeting is not expected to happen today.

This is the second offer by Bennett to meet in person with chiefs opposed to the Coastal GasLink project that has gone unanswered. A spokesperson for Bennett said the minister is willing to meet with the chiefs at any time and any place.

Scheer said talk of a negotiated end to the illegal protests sends the wrong message to other would-be “radical activists” because Ottawa is rewarding bad behaviour with a promise to send ministers to talk. Scheer has said a court-ordered injunction should be enforced by police.

“There are people who have been laid off — they can’t tell their mortgage holder, ‘Hold on a few weeks until the situation is resolved when Ms. Bennett has a meeting.’ They can’t tell their credit card company, ‘Sorry there’s a blockade and I can’t pay you right now.’ My sympathy is with them. They have a right to get back to work.”

A spokesperson for the Teamsters, the union the represents many CN employees, said the layoffs are entirely related to the ongoing blockades. The temporary job losses are separate from the corporate reorganization announced late last year.

“On top of these numbers, we have hundreds more members who, without being formally laid off, simply aren’t being called in to go work as a result of the blockades. These workers are not being paid during this time,” Christopher Monette said.

A spokesperson for Unifor, the union that represents employees at Via Rail, said 875 workers received layoff notices Wednesday because much of the passenger rail network is shut down.

Indigenous Services Minister Marc Miller said he and Bennett are ready to meet with the chiefs “on a moment’s notice” to end the blockades.

“Everyone wants to take the air out of this balloon in the most controlled way. Most people are coming at us with a pin, but that’s not the solution,” Miller said, citing Conservative demands to have police enforce a court injunction allowing law enforcement to dismantle the blockades.

“We ask for a little more patience because there is a real opportunity here to show the world we can resolve these issues in a peaceful way,” Miller said.

Speaking in the Commons Thursday, Bennett said Ottawa is committed to working with the Wet’suwet’en to affirm their Indigenous rights and title to the land and “clarify the path forward.”

As it stands, the federal government does not recognize Wet’suwet’en claims to the area where the natural gas pipeline will be built. She said she wants to discuss these long-term issues but also the “urgent” matter of the blockades in a face-to-face meeting.

“We are at a critical time in Canada. We need to deal effectively with the uncertainty,” Bennett said. “I am hoping to be able to return to B.C. as soon as possible to continue that work.”

Bennett called on the hereditary chiefs to ask their Mohawk allies to dismantle the rail blockade in southern Ontario.

“We hope that the Wet’suwet’en will be able to express to those in solidarity with them that it is now time to stand down and let us get back to work,” Bennett said.

A number of chiefs are destined for the Tyendinaga Mohawk Territory near Belleville, Ont., Friday to meet with protesters there who have been blockading CN Rail in solidarity with the B.C. Indigenous peoples opposed to the pipeline.

The Mohawk have said they will not dismantle their blockade until the RCMP leave the traditional territory of the Wet’suwet’en in northern B.C.

Public Safety Minister Bill Blair said Thursday the RCMP have offered to pull back from their current location near the service road that leads to a Coastal GasLink construction site. The force has said it would operate in the nearby town of Houston, B.C., with the understanding that the road would be free of further blockades.

Earlier this month, the RCMP arrested protesters assembled on that road and dismantled a roadblock that stopped pipeline workers from building the $6.6-billion project essential to the LNG Canada development. The B.C. Supreme Court issued an injunction in December authorizing the police to clear away the protests that had blocked access to the public road.

“They are changing their profile on the property,” Blair said. “I think the RCMP have made a very sound operational decision based on the current circumstances.”

“They’ve asked for a commitment from the hereditary chiefs that the road will remain free of obstruction and it is moving toward a less confrontational and a more peaceable arrangement entirely appropriate to the circumstances, and I’m very hopeful that that will satisfy the concerns that were raised,” Blair said.

Trudeau has said his government prefers “dialogue” with protesters over police action, but it’s not clear what conversations with Indigenous communities has produced to this point.

The sole in-person meeting between a cabinet minister and the Mohawks, a Saturday visit by Indigenous Services Minister Marc Miller to Tyendinaga, failed to end the blockade.

Via Rail announced nearly 1,000 layoffs Wednesday as it grapples with a nationwide shutdown, while CN Rail has issued temporary pink slips to 450 workers as the blockade has shuttered much of its eastern Canadian operations.

The Conservatives used their Opposition day motion Thursday to hold a debate on the Coastal GasLink project in the Commons.

The motion calls on MPs to “stand in solidarity with every elected band council on the Coastal GasLink route, the majority of hereditary chiefs, and the vast majority of the Wet’suwet’en people, who support the Coastal GasLink project, and condemn the radical activists who are exploiting divisions within the Wet’suwet’en community, holding the Canadian economy hostage, and threatening jobs and opportunities in Indigenous communities.”

While it is true that all of the elected band councils have signed impact benefit agreements with the proponent, TC Energy, it is inaccurate to say that a “majority of hereditary chiefs” support the project. In fact, all of the 13 Wet’suwet’en hereditary houses oppose its construction.

There is a debate within the Wet’suwet’en community as to who is best positioned to speak for its membership: the elected band councils or the traditional form of governance, the hereditary chiefs. There is also a dispute among some of the membership as to who can rightly use the title “hereditary chief.”

Bennett said it is up to the Wet’suwet’en people themselves to develop some form of “consensus.”

She said the Conservatives and other “outside voices” are dividing the community more than it already is.