Scotties championship field taking shape as P.E.I.’s Birt books ticket in round of 8 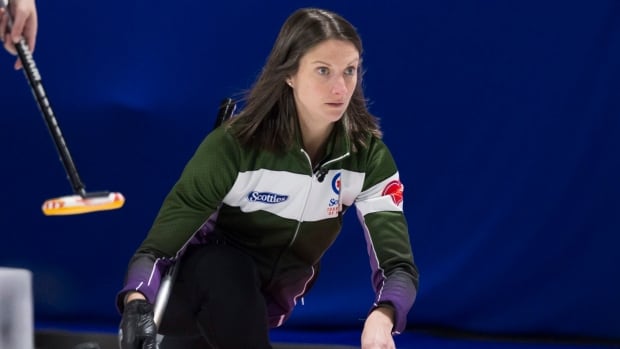 Prince Edwards Island’s Suzanne Birt advanced to the championship round of the Scotties Tournament of Hearts with an 8-7 win over Kerry Galusha of Northwest Territories on Wednesday.

Birt (5-2) joins Ontario’s Rachel Homan and the Jennifer Jones wild card team (6-1), and Manitoba’s Kerri Einarson (5-1) in the round of eight.

The top four teams in each pool of eight carry their records with them into the championship round starting Thursday.

Ties for fourth are solved by tiebreaker games.

Mary-Anne Arsenault beats Corryn Brown 10-4 in Draw 13, Nova Scotia and B.C. will battle again on Thursday in a tiebreaker. 0:44

Jones was a 7-4 winner over Newfoundland and Labrador. Homan thumped Yukon 9-3.

Pool A was still in flux heading into the last draw of the round robin. Only Einarson had a championship spot locked down.

Alberta’s Laura Walker and New Brunswick’s Andrea Crawford (3-3) were playing to get into tiebreakers.

Teams in the championship round play four games against opponents from the other pool.

The four rinks with the best records advance to Saturday’s Page playoff. The semifinal and final are Sunday.

'It's unacceptable': Maple Leafs look in the mirror after recent run of ugly efforts