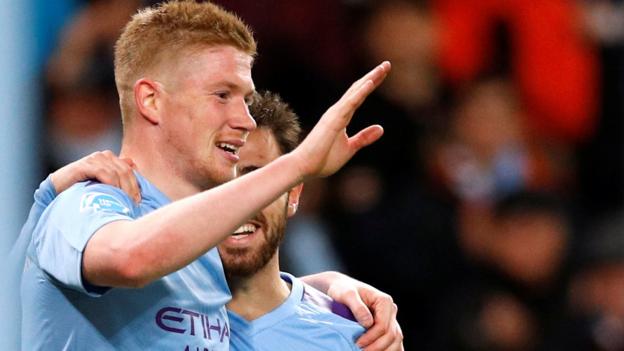 Kevin de Bruyne made one goal and scored another as Manchester City easily saw off West Ham in their first game since being banned from European competition for two years by Uefa.

Friday’s punishment – which City say they will appeal against at the Court of Arbitration for Sport – has cast a shadow over the club’s future but brought a defiant reaction from their fans inside the ground.

There were frequent anti-Uefa chants in the first half, with the loudest coming just after Rodri had met Kevin de Bruyne’s corner at the near post to break the deadlock with a flicked header that Aymeric Laporte may have helped over the line.

City’s supporters had brought banners too, with some reading ‘Uefa cartel’ and ‘Uefa mafia’, and there were also plenty of songs in support of manager Pep Guardiola and the club’s owner Sheikh Mansour.

On the pitch, the City players certainly did not seem to be lacking any focus and only some poor finishing, notably by Gabriel Jesus, stopped this from being a much more comfortable Premier League victory.

West Ham offered little in response, managing only six touches in the opposition area, and failing to register a single shot at goal until Michail Antonio blasted over with 15 minutes left.

The Hammers remain in the relegation zone, a point adrift of safety after a run of six league games without a win and with a trip to Anfield looming on Monday as their next test.

At the other end of the table, Guardiola’s side are now four points clear of third-placed Leicester but even this win leaves them a distant second to leaders Liverpool, who are 22 points clear with 12 games remaining,

Off the pitch, City are clearly up for the fight but they will have to be the same on it, with three competitions still up for grabs even though the defence of their Premier League title is all but over.

‘Business as usual for City’

The message from the club since Friday’s bombshell has been that it is ‘business as usual’ while they fight their ban, a mantra that chief executive Ferran Soriano repeated when he broke his silence about the allegations earlier on Wednesday.

City’s desire for internal stability to calm the external hysteria surrounding Uefa’s decision and the possible ramifications of any additional punishment by the Premier League, was helped by Pep Guardiola’s suggestion over the weekend, relayed to the media via friends, that he will stay.

But it would be understandable if Uefa’s sanction, plus the widespread criticism of the club that has followed and the continued speculation of what it all means for the future of Guardiola and his squad, had affected the focus and feelings of City’s players.

If it has distracted them, then they did not show it here. Aided by the industrious David Silva and the steady presence of Rodri, De Bruyne pulled the strings in midfield, and also made his 16th league assist and scored his eighth league goal of what has been a stellar individual season.

City are still in the Champions League this season, of course, and this was a welcome chance to find some rhythm before they face Real Madrid at the Bernabeu next Wednesday.

From that perspective, it was a big boost for Guardiola that Laporte, his best defender, came through his 65 minutes on the pitch unscathed, as any plan to shut Real out will surely rely heavily on him.

Hammers go down in meek surrender

City’s issues are well documented but West Ham have their own problems and their own apocalypse scenario – otherwise known as relegation – remains a realistic fate.

While the Hammers did not collapse at the back in the manner they did when they threw away victory against Brighton in their last outing, there were few positives here to cheer their band of travelling fans.

Far fewer made the trip north than would have done for the original fixture on 9 February, which was postponed because of Storm Ciara.

Those that did saw David Moyes’ side deliver a performance that ended as meek surrender, having appeared from the start to be merely an exercise in damage limitation.

There were few moments when the visitors posed any sort of threat, and their lack of attacking intent was summed up by their meagre total of three efforts at goal, none of which were on target.

The longer West Ham remain in the bottom three, the more pressure will build on Moyes and his men, so it must be a real worry that they head to Anfield next.

City travel to third-placed Leicester on Saturday (17:30 GMT) while West Ham are away at Liverpool on Monday (20:00 GMT).