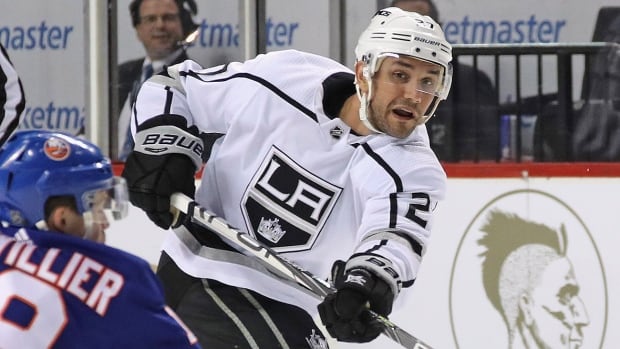 Alec Martinez is going from being a King to a Knight — a Golden Knight.

“Alec has been an important part of the organization for a number of years and was a key member of our Stanley Cup teams [in 2012 and 2014],” Blake said in a statement released by the team. “We thank Marty for everything he’s done for our organization, our fans and our community.”

Martinez, who was linked to trade rumours for weeks and held out of the Kings’ 6-3 loss at Winnipeg on Tuesday, has spent all 11 of his NHL seasons in L.A.

A fourth-round pick in 2007, he has just one goal, eight points and a minus-9 rating in 41 games this season after posting a career-high 39 points three seasons ago, but he was second on the Kings in even strength, power play and shorthanded time.

Although he has never scored more than 11 goals in a regular season, Martinez earned a permanent place in franchise lore by scoring the series-winning overtime goals in both the Western Conference finals and Stanley Cup final in 2014.

His famous winning shot to beat the Blackhawks in the conference finals deflected in off the chest of Chicago’s Nick Leddy, ending a superb seven-game series at United Center. Chicago and Los Angeles combined to win all four Stanley Cup titles from 2012-15, splitting two straight excellent conference finals along the way.

Martinez then scored the double-overtime winner in Game 5 of the 2014 Stanley Cup final against the New York Rangers, converting a rebound of Tyler Toffoli’s shot off Henrik Lundqvist at Staples Center. Martinez’s goal and his ecstatic, glove-flinging celebration — dubbed “Jazz Hands” by Kings fans — are arguably the most memorable moment in Kings history.

Martinez’s contract, which doesn’t expire until after next season, is worth $4 million US in annual average value.

The Michigan native missed a month of action earlier this season after suffering lacerations to an artery and two nerves in his right wrist from an opponent’s skate.

The Kings are preparing to miss the playoffs for a second consecutive season for the first time since 2009.

Los Angeles has the Western Conference’s worst record at 21-34-5 under first-year coach Todd McLellan, and only Detroit has fewer points in the overall NHL standings.

Vegas began Wednesday tied with Edmonton for the Pacific Division lead, although the top five teams are separated by only two points.

Martinez joins a Golden Knights defensive group that includes Brayden McNabb, who played for the Kings from 2014-17 before Vegas chose him in the expansion draft.

'It's unacceptable': Maple Leafs look in the mirror after recent run of ugly efforts