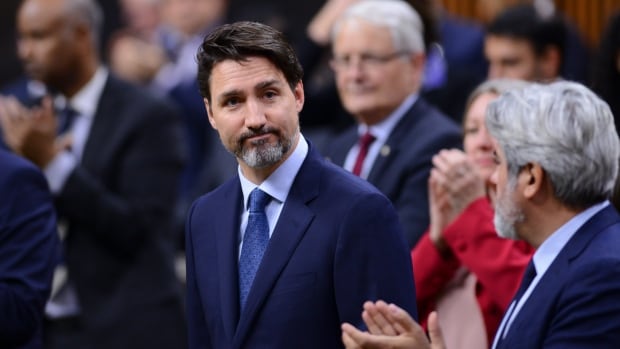 Addressing the House of Commons Tuesday, Prime Minister Justin Trudeau asked Canadians to be patient with his government as it seeks a negotiated end to Indigenous protests that have crippled the country’s transportation network.

Trudeau said his government is committed to “dialogue” over the use of force with the Indigenous protesters who have shut down CN Rail in eastern Canada and much of Via Rail’s services nationwide by blocking a key artery in southern Ontario.

Conservative Leader Andrew Scheer said Trudeau’s call for more talks with the protesters has emboldened “radical activists” who are intent on holding the Canadian economy hostage.

In a forceful response to Trudeau, Scheer said the prime minister’s reluctance to use the police to stop the illegal blockades was akin to appeasement, a stance that privileges activists over “hard-working Canadians” and Indigenous people who support development.

Trudeau held a meeting with opposition leaders later Tuesday but didn’t extend an invitation to Scheer. Speaking to reporters after the talks, Trudeau said Scheer’s speech signalled he isn’t willing to cooperate.

The blockade has been in place for 12 days and CN has been forced to shutter its network east of Toronto since Friday — a devastating development for businesspeople, commuters and farmers who rely on the railway for their livelihoods. The protesters from the Tyendinaga Mohawk Territory say they are acting in solidarity with some of the Wet’suwet’en hereditary chiefs in B.C. who oppose the Coastal GasLink pipeline project running through their traditional territory.

“On all sides, people are upset and frustrated. I get it,” Trudeau said. “It’s understandable because this is about things that matter — rights and livelihoods, the rule of law and our democracy.”

Prime Minister Justin Trudeau is calling on all sides in the rail blockade to sit down and talk, but says that “finding a solution will not be simple” during a statement in the House of Commons Tuesday. 9:56

While the prime minister did not lay out a clear path forward in his speech, Trudeau seemed to be ruling out police intervention at this point in favour of more conversations with the protesters. He said the suggestion from the Conservative Opposition that Ottawa forcibly remove the protesters from camps along the CN tracks in Belleville, Ont. is “not helpful.”

“Finding a solution will not be simple. It will take determination, hard work and co-operation,” Trudeau said. “We are creating a space for peaceful honest dialogue with willing partners … We need Canadians to show both resolve and collaboration. Everyone has a stake in getting this right.”

An hours-long meeting between Indigenous Services Minister Marc Miller and the Mohawk on Saturday failed to end the blockade. Crown-Indigenous Relations Minister Carolyn Bennett flew to B.C. Monday to meet with Wet’suwet’en and Gitxsan hereditary chiefs, but that meeting never actually took place.

Trudeau said that, for too long, the federal government has ignored Indigenous demands to solve lingering land and treaty disputes. He chastised Conservative Leader Andrew Scheer (without mentioning him by name) and other politicians he accused of pushing Ottawa to “act with haste and boil this down to slogans and ignore the complexities.”

‘Weakest response to a national crisis’

He said Trudeau’s speech offered Canadians “a word salad” with no meaningful plan to restore rail service and end the illegal blockades that are hampering the country’s economy.

Scheer said Trudeau is standing with activists are determined to shut down the country’s energy industry. “

On Friday, Scheer said the prime minister should direct the RCMP to remove the protesters. The Ontario Provincial Police are on hand in Tyendinaga but they have not yet enforced a court injunction that gives them the power to dismantle the protest camps and arrest those behind the blockade.

Trudeau had a meeting with Bloc Québécois Leader Yves-François Blanchet, NDP Leader Jagmeet Singh and Elizabeth May, the Green Party’s parliamentary leader, in his office Tuesday to discuss the government’s response to the ongoing blockades.

Scheer said Trudeau was using the meeting to distract from a “disastrous speech” that was void of any concrete plan to dismantle the blockades. He said the other opposition leaders were used as pawns by the Prime Minister’s Office.

Singh said the meeting with with the prime minister was “constructive” and Scheer should be denounced for the speech he delivered in the Commons. “I think what he said was reprehensible. What he said was divisive. It was purposely designed to pit some groups against another,” Singh said.

“It’s on everybody. It’s not on any one individual,” he said. “I’m just calling on all the parties to come together, get this dialogue started in a constructive way.”

Mohawk Council of Kanesatake Grand Chief Serge Otsi Simon called on protesters to end the rail blockades as a “show of good faith.”

“Bringing down the blockades doesn’t mean that you surrender. It doesn’t mean we’re going to lay down and let them kick us around. No, it would show compassion,” he said.

“I’m simply pleading with the protesters … Have you made your point yet? Has the government and industry understood? I think they did.”

National Chief Perry Bellegarde of the Assembly of First Nations spoke with reporters on Tuesday 1:05

Dennis Darby, CEO of Canadian Manufacturers and Exporters, said the situation is “beyond serious.”

The group estimates that goods worth about $425 million are being stranded every day the blockade continues — and it will take three to four days of work to recover from a single day of disruption.

‘The time to act is now, says Curtis Frank, as idle trains cause a huge disruption in the domestic and global supply chain.   1:16

Bob Masterson, president and CEO of the Chemistry Industry Association of Canada, said a prolonged shutdown inevitably would lead to shortages of his industry’s products, such as jet fuel for planes, propane for home heating and chlorine for drinking water.

Protesters with the Mohawks of Tyendinaga have been stationed beside the tracks near Belleville, Ont., since Feb. 6 to protest the RCMP’s raids in Wet’suwet’en territory in northern B.C.

Almost all other Via Rail services remain cancelled, with the exception of Sudbury-White River and Churchill-The Pas, until further notice.

Via says the partial resumption of service between Ottawa and Quebec City follows a notification received from Canadian National Railway.