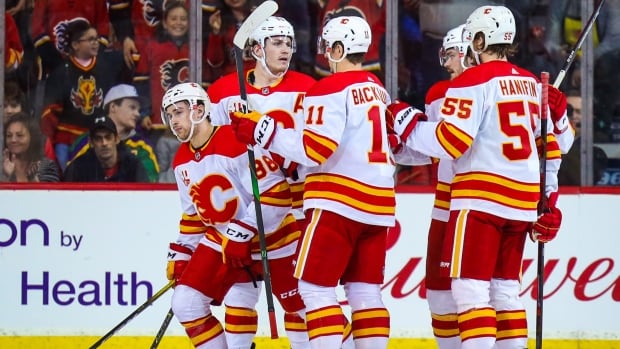 Andrew Mangiapane was front and centre after the most productive game of his NHL career helped earn an important comeback win for the Calgary Flames on Monday.

Mangiapane scored his first career hat-trick and added assisted on the go-ahead goal as the Flames used five third-period goals for a 6-4 come-from-behind victory over the Anaheim Ducks.

“Obviously it was nice to get the first one out of the way,” said the 23-year-old left winger, who is up to 13 goals on the season. “Confidence is big in this league. Every game you play, every move you make, you’re growing as a player.”

With the home side trailing 3-1, Mangiapane’s 12th goal and second of the afternoon at 4:46 got the comeback started. Collecting a loose puck on the side boards, he drove to the front of the and after a nice move, put a backhand over Ryan Miller.

After Sam Bennett picked the top corner to tie it 19 seconds later, Mangiapane set up Matthew Tkachuk at 12:59. Tkachuk’s initial shot was stopped, but he fired in the rebound from a scramble.

Andrew Mangiapane and the Flames exploded for five goals in the third period of their 6-4 win. 1:25

“He was all over the puck tonight,” said Tkachuk. “The way he is able to protect [the puck] down low, for not being a huge guy, is pretty impressive. He’s strong on his feet, strong on his stick and makes some great plays.”

Mangiapane capped off his first-career four-point game with an empty-net goal, taking a feed from Johnny Gaudreau.

“There was no way [Gaudreau] was going to shoot that puck. He was going to do whatever he had to do to make a pass,” said Flames interim head coach Geoff Ward. “Guys feel good for a guy like that. He comes in, he’s a great team player, he’s well-liked in the room. He works extremely hard. He’s earned the respect of the veteran players. so the guys were really pulling for him to get it and it’s nice to see him get it.”

Mangiapane also finished plus-4 in 18:45 of ice time, both of those were also career bests.

‘We definitely needed this one’

Sean Monahan scored what held up as the winner for Calgary (31-24-6), which snapped a four-game losing skid on home ice.

“We definitely needed this one,” said Cam Talbot, who had 26 saves to even his record at 9-9-1. “We could have folded our hand when they got that lucky bounce in the third and made it 3-1, but we stuck with it. Just got back to getting pucks deep, getting pucks to the net, pucks and bodies, and just start banging away at rebounds.”

Adam Henrique, Jakob Silfverberg, Nicolas Deslauriers and Devin Shore, with four seconds remaining, scored for Anaheim (24-28-7). The Ducks had gone six straight on the road without a regulation loss.

Leading 2-1 after 20 minutes, Anaheim made it a two-goal cushion at 3:05 when Deslauriers’s shot from the sideboards caromed sharply off the skate of Flames defenceman Michael Stone and went over Talbot’s shoulder.

With NCAA alums Cale Makar and Quinn Hughes battling it out for the Calder Trophy, Rob Pizzo looks at 9 other players who chose a career path south of the border. 2:22

But the Flames dug in and responded big time with five straight goals.

“I wish I could stand out here and say that we quit playing, but goals two, three, four and five, we had the puck on our stick, all under full control,” said Ducks coach Dallas Eakins. “Goals two, four and five are just simple breakout plays that our guys make with their eyes closed and for some reason we wanted to complicate it by either coming up the strong side or going to the front of the net.”

The Ducks opened the scoring 5:53 into the second, taking advantage of a turnover inside the Anaheim blueline by Bennett. Nick Ritchie corralled the loose puck and sprung Henrique on a breakaway.

Mangiapane tied it up less than a minute later, burying Noah Hanifin’s rebound, but another costly mistake led to the Ducks re-taking the lead at 10:37. Hanifin mishandled the puck in his own end allowing Silfverberg to stroll in alone on Talbot.

“It was more us giving it to them than them taking it to us,” said Anaheim defenceman Hampus Lindholm. “We, as a team, need to find ways to win those games, especially a road game, 3-1 in the third, that’s a very good position to be in.”