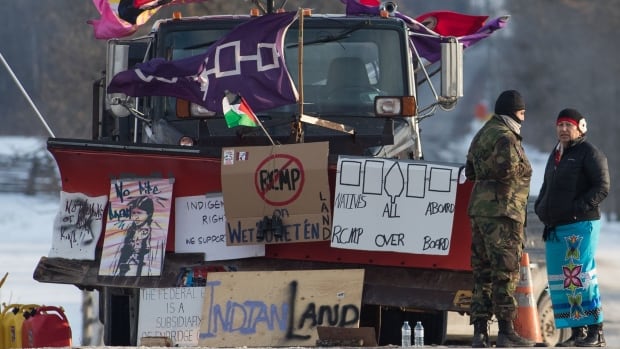 This week, we ask our panellists about ongoing blockades and protests in cities across Canada staged by supporters of the hereditary chiefs of the Wet’suwet’en First Nation in opposition to the Coastal GasLink pipeline in northern B.C.

The panel also discusses Prime Minister Justin Trudeau’s bid for a UN Security Council seat and why another big name declined to run for the leadership of the Conservative Party of Canada.

Watch the clips below.

Supporters of the Wet’suwet’en First Nation have shut down rail lines and staged large protests in numerous cities across Canada this week in opposition to the Coastal GasLink pipeline in northern B.C. 13:07

WATCH | What comes next after Wet’suwet’en protests?

Our political panel discusses the fallout from the Wet’suwet’en rail blockades, including the implications for reconciliation and construction of the Trans Mountain pipeline. 9:34

Prime Minister Justin Trudeau wrapped up a tour of Africa this week, a trip intended to convince the continent’s leaders to endorse Canada for a spot on the UN Security Council. 6:36

WATCH | John Baird will not run for the Conservative leadership:

Former Conservative cabinet minister John Baird said this week he will not enter the race to succeed Andrew Scheer as leader of the Conservative Party. 8:23
Tags: News/Politics

Children among 22 killed in attack on Cameroon village