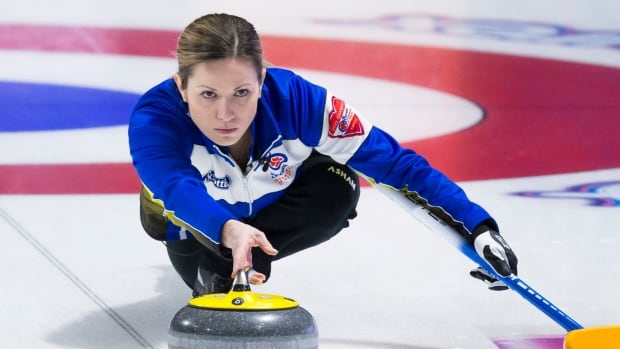 Laura Walker wasn’t going to curl with a team this season.

She was ready to dial back to mixed doubles events while she and husband Geoff Walker — Brad Gushue’s lead — contemplated starting a family.

“I was pretty set on playing just mixed doubles and taking a little bit of time for myself,” Walker said.

“Geoff and I are wanting to start a family. I just wasn’t sure I could give the women’s game 100 per cent any more.”

So, she declined Taylor McDonald’s initial invitation to skip a team that included her, Kate Cameron and Nadine Scotland.

McDonald tried a second time with the message the team would accommodate any changes in Walker’s life.

“I think the words that changed it for me was when Taylor said they would support me through anything because they ‘hate that women feel like they have to choose,”‘ Walker said.

“Those were the words that kind of flipped the switch.

“I said ‘you know you’re right. I can do it all. I shouldn’t have to choose. Knowing I have the support of my teammates was the biggest thing for me.”‘

In their first season together, Walker, Cameron, McDonald and Scotland out of Edmonton’s Saville Community Sports Centre went undefeated to win the Alberta women’s championship.

Walker, 29, is making her Scotties Tournament of Hearts debut.

“I said I wasn’t going to join a team unless I felt we could win,” she said. “When I said yes, it was because I felt like we could compete.

“I didn’t know we could do it right away, but I felt in the long run if we were work together we could do that. So far, so good.”

Laura Walker’s fantastic shot in the 5th end leads to 3 points and a 8-3 win over Noemie Verreault.  1:01

Prince Edward Island, Newfoundland and Labrador and the Jennifer Jones wild-card team were knotted at 1-1.

Northwest Territories and Yukon were both 0-2.

The Page playoffs are Saturday followed by Sunday’s semifinal and final.

Silvernagle attempted a thin double takeout to score two for the win, instead of drawing for one and taking her chances in an extra end.

B.C.’s Corryn Brown was an 8-5 winner over Kerry Galusha of Northwest Territories.

A pre-draw ceremony honouring the late Aly Jenkins of Warman, Sask., had competitors and spectators wiping their eyes.

Saskatoon curler Aly Jenkins is honoured at the  Scotties Tournament of Hearts in Moose Jaw, Sask. Jenkins died in October from complications during the birth of her third child. 2:45

The 30-year-old curler died during childbirth in October.

Jenkins played lead for the Sherry Anderson team that lost the 2019 provincial final to Silvernagle.

“It’s Saskatchewan, so it makes it so much more close to home,” Martin said. “She was important to all of us.”

Earlier in the day, Manitoba’s Kerri Einarson escaped with a 6-4 victory over Nunavut’s Lori Eddy at the Scotties Tournament of Hearts on Sunday in Moose Jaw, Sask.

Eddy gave up a steal of two in the ninth end and Einarson ran her out of rocks in the 10th to avoid a massive upset. Einarson is second in the Canadian rankings while Eddy holds the No. 134 position.

Einarson’s great shot breaks the 4-4 deadlock in the 9th end and leads to two points and the 6-4 victory over Lori Eddy.   0:40

Ontario’s Rachel Homan posted a 10-5 win over Erica Curtis of Newfoundland and Labrador.