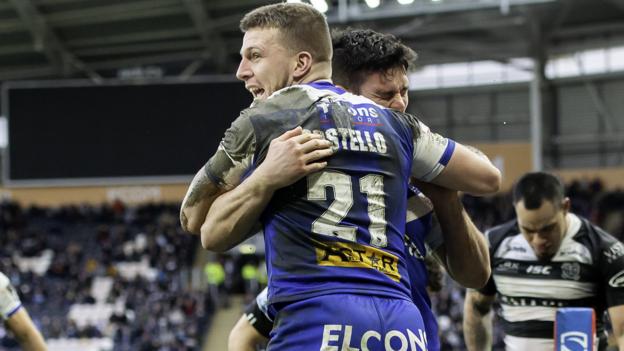 St Helens scored five second-half tries to come from behind and inflict a first defeat of the season on Hull FC.

Despite the 2019 Grand Final winners’ first-half dominance, they trailed 6-2 at the break courtesy of a converted Carlos Tuimavave try for the home side.

But, within 20 minutes of the restart, Matthew Costello, Luke Thompson, Louie McCarthy-Scarsbrook and James Bentley had gone over for Saints.

Aaron Smith added a fifth try, between replies from Tuimavave and Jamie Shaul.

St Helens full-back Tommy Makinson added 12 points from the tee in difficult kicking conditions on what was his first appearance since the side’s Super League Grand Final win over Salford in October, during which he dislocated his shoulder, causing him to miss Great Britain’s autumn tour.

And those goals were vital in quickly establishing a healthy lead following an unrewarding opening period.

The Black and Whites, so impressive in wins at Leeds and over Hull KR, simply could not cope with the continued intensity of Kristian Woolf’s team after the break. Having led through Tuimavave’s poacher’s effort when Saints failed to deal with a high kick, the hosts were torn apart in 15 second-half minutes.

First Costello was the beneficiary of a powerful Dom Peyroux, then Thompson pounced on an error to touch down, McCarthy-Scarsbrook barged his way under the posts and Bentley soon added a fourth.

Although Lee Radford’s team briefly threatened a response when Tuimavave crossed for a second time, Smith’s quick response put the game beyond doubt.

Shaul’s consolation effort in the dying seconds, converted by Marc Sneyd for the third time in the game, gave the scoreline a closer look that the contest was in reality.

Victory takes Saints top of the table with two wins and a defeat from three games, the same record as Hull. It leaves Huddersfield as the only remaining unbeaten team in this season’s Super League.