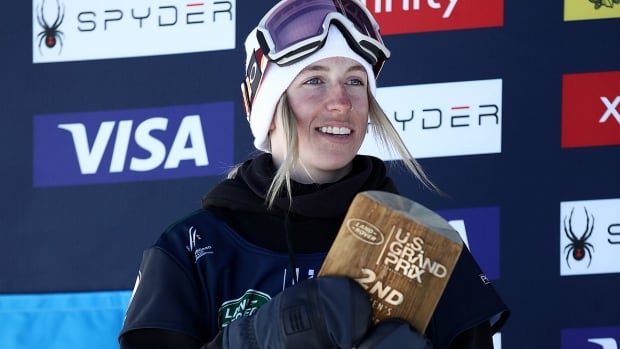 Blouin, who hails from Stoneham-et-Tewkesbury, Que., scored 78.31 points on her first run at Canada Olympic Park. Even though she had already clinched top spot, she didn’t hold back on her second trip down the hill and earned 79.56 points from the judges to defeat Silje Norendal of the Netherlands (75.68) and Great Britain’s Katie Omerod (68.71).

The Stoneham-et-Tewkesbury, Que., native tops the podium on home soil for her first World Cup victory.  4:02

With one race to go this season, Blouin was second in the slopestyle standings with 2,200 points. She was 400 points behind Britain’s Katie Ormerod, who finished third on Sunday with 68.71 points.

Blouin, 23, captured her first World Cup podium of 2020 on Feb. 1, with slopestyle silver at Mammoth Mountain in California.

Sunday’s silver was the eighth career World Cup medal and third this season for Blouin, who captured silver in women’s slopestyle snowboarding at the 2018 Olympics in Pyeongchang, South Korea.

Brearley, a 16-year-old from Gravenhurst, Ont., scored 76.53 in his first run before taking a hard fall after completing the last jump on his second attempt. His best score held up to give him bronze behind New Zealand’s Tiarn Collins (80.50) and World Cup leader Ruki Tobita of Japan, who was second with 79.53.

The Gravenhurst, Ont., native grabbed the third spot on the podium with a first run score of 76.58 2:24
Tags: Sports/Olympics/Winter Sports/Freestyle Skiing