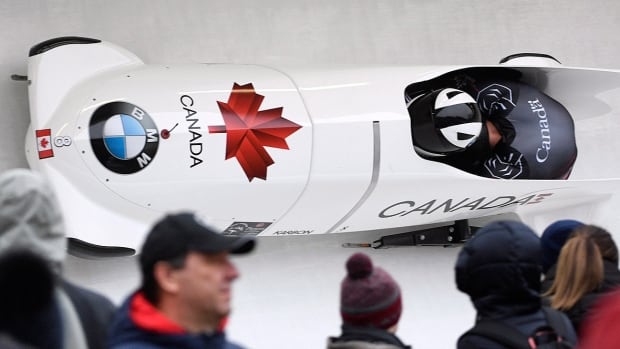 A new day, new brakeman and the same result for Justin Kripps, who piloted Canada to a second bronze medal in as many days Sunday at the final 2-man World Cup event of the season in Sigulda, Latvia.

The 33-year-old reigning Olympic champion from Summerland, B.C., was joined by former Canadian Football League receiver Sam Giguere of Sherbrooke, Que., for the first time and posted a two-run time of one minute 39.59 seconds.

“It was really good today,” Kripps told Bobsleigh Canada Skeleton after earning his 17th 2-man medal. “These are the first races we have had on this track, so we were just trying to get in the medals. We managed to get on the podium in both races.”

Kripps and Saskatoon’s Ben Coakwell placed third in Saturday’s 2-man race after Yun-jong Won of South Korea and Switzerland’s Simon Friedli crashed on their runs in Sigulda, Latvia. They clocked 1:39.53 on the 1,200-metre track.

It was Kripps’ first podium finish in the event since Dec. 8 when he and Cam Stones were third in Lake Placid, N.Y. Stones has sat out races of late to rest for the world championships in Altenberg, Germany, starting Feb. 21.

Similar to Saturday, Kripps and Giguere sat fifth after their first run down the 16-corner chute and battled back to the podium after putting down the second-fastest time in the final heat in 49.81 seconds.

The Summerland, B.C., native leaves Sigulda, Latvia with two bronze medals and a third place finish in the overall standings.  1:19

“The ice conditions were a bit different for the first few sleds who had a bit of an advantage today,” Kripps said. “We had two good pushes and two good drives.

“This is a driver’s track. It is similar to Lake Placid in that it is very busy, there is lots of driving to do, but you also have to let the sled run.”

Latvia’s Oskars Kibermanis and Matiss Mikniss thrilled the home crowd by following up Saturday’s win with another victory in 1:39.18. Switzerland’s Simon Friedli and Gregory Jones were second at 1:39.54.

Latvia’s Oskars Kibermanis and Matiss Miknis make it back to back gold in Sigulda, Latvia. 2:27

Kripps, along with Coakwell, Giguere and Stones of Whitby, Ont., finish third in the overall World Cup standings. Kripps secured the Crystal Globe as season title winner after piloting the Canadian sled to four bronze medals and one silver in eight races.

“It’s good to know we are always fighting for the podium in every race,” said Kripps, who was second in the combined standings, thanks to a third-place finish in the overall 4-man rankings.

“Finishing on the podium in the overall shows the level we are at. We had a couple of throwaway races where we were trying different things to get better that maybe held us back from second overall, but I’m happy to get another Crystal Globe.”

Manitoba escapes with win over Nunavut at Scotties