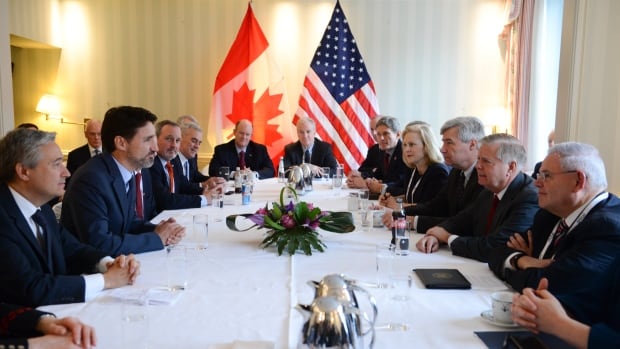 The federal Liberal government will “have the votes” to ensure North America’s new trade deal becomes the law of the land, Prime Minister Justin Trudeau said Friday before championing Canada’s fight against mounting protectionism and the erosion of rules-based global institutions.

Trudeau, in Germany for the Munich Security Conference, assured U.S. lawmakers that the House of Commons will vote on the newly negotiated Canada-U.S.-Mexico Agreement “in the coming weeks.” Once approved, the signatories have three months to negotiate the regulations governing the deal before it goes into effect, likely this summer.

“Good outcome, you think?” asked Republican Sen. Lindsey Graham, a member of the Senate committee on foreign relations and a close confidant of Donald Trump who led a bipartisan delegation to the conference comprising members of the Senate and the House of Representatives.

Hours later, though he didn’t mention the U.S. or its president by name, Trudeau tacitly acknowledged the seismic effect of Trump’s elbows-up approach to trade and foreign policy — a scorched-earth, America-first style he suggested has helped to undermine the rules-based international order.

“We live in a world in which more leaders are challenging long-standing principles of international relations. Protectionism is on the rise, trade is being weaponized, the benefits of democratic governance are being questioned,” Trudeau told an audience of world leaders.

Canada’s ongoing efforts to enshrine principles like environmental protection, labour standards and Indigenous rights in its trade agreements have helped to ensure that globalization doesn’t continue to alienate people around the world who feel left behind by the march of progress, he said.

Indeed, Trudeau added, the country might not have been able to successfully negotiate deals like the CUSMA, the Canada-EU trade agreement and the Trans Pacific Partnership — making it the only G7 nation with a free-trade agreement with every other G7 partner — had it not been for its willingness to defend such principles.

“Had we chosen to ignore the very real concerns of people across the political spectrum on free trade and globalization, we might not have preferential access to two-thirds of the global economy today.”

Trudeau also sang the praises of a Canadian-led effort to spearhead badly needed reforms at the World Trade Organization, one of the rules-based pillars that has been under sustained attack from the Trump administration, which deems it arbitrary and unfair. Since long before Trump, the U.S. has been blocking the appointment of U.S. judges to the WTO’s appellate body, making it impossible to adjudicate disagreements.

A contingent of WTO members known as the Ottawa Group is focused on finding ways to resurrect the organization’s dispute-settlement process and keep disagreements from escalating, fix the negotiating and rule-making functions and modernize how its committees operate.

“Canada,” Trudeau said, “will continue to step up at a time when others may be stepping away.”

The CUSMA implementation bill currently before the House of Commons, introduced last month by Deputy Prime Minister Chrystia Freeland, is expected to pass. That is in spite of the Liberal government’s minority status and a lack of enthusiasm on the part of the New Democrats, who have asked for a thorough review of the agreement, and the outright opposition of the Bloc Quebecois.

‘Let’s get this deal signed’

The Opposition Conservatives, while loathe to give political succour to Trudeau’s Liberals, are expected to grudgingly support the deal in the name of Canada’s economic interests — a position some of their provincial political allies endorsed wholeheartedly last week during a goodwill mission in Washington.

“This is not the time to play politics,” implored Ontario Premier Doug Ford. “Let’s get this deal signed.”

On Friday, Trudeau assured members of Congress not especially familiar with Canada’s political dynamics that ratification was only a matter of time.

“Our parliamentary system is a little … I won’t say a little more complex than you guys,” Trudeau joked with Graham at the start of the meeting. “It works fine, we just normally start after you guys finish your processes.”