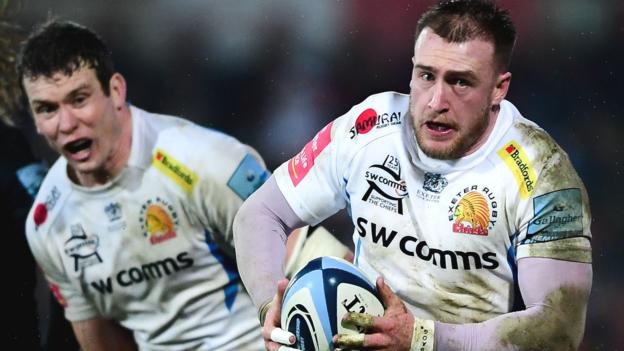 Exeter led 7-3 at half-time thanks to Jacques Vermeulen’s converted try, and Gareth Steenson then kicked four penalties to extend their advantage.

The Chiefs were firmly in control once returning Scotland full-back Stuart Hogg ran in a counter-attacking try.

Gloucester hit back through Jake Polledri and Louis Rees-Zammit but were unable to salvage a losing bonus point.

Heavy rain and a swirling wind made for difficult conditions, with both sides making handling errors, although Exeter impressed with a battling and clinical second-half performance at Kingsholm.

Gloucester dominated possession after flanker Vermeulen powered over from close range in the 10th minute, yet the Cherry and Whites were unable to make the most of their opportunities to score – with Billy Twelvetrees’ penalty all they had to show for their efforts at half-time.

Exeter, with the wind behind them after the break, began to exert their dominance and Steenson added 12 points with the boot in the space of 12 minutes as Gloucester paid the price for ill-discipline at the breakdown.

Hogg, back with Exeter after captaining Scotland in their first two games in the Six Nations, started the move for his side’s second try – picking up the ball in his own 22 before feeding Sam Simmonds and receiving a return offload from the number eight, then accelerating down the left flank and crossing.

The hosts eventually found gaps in the Chiefs defence in the final 10 minutes as Italy forward Polledri burrowed over and winger Rees-Zammit was adjudged to have touched down in the right-hand corner following a consultation with the television match official.

Gloucester remain a place and a point above fifth-placed Bristol Bears having suffered back-to-back defeats, while Exeter move five points clear at the top ahead of second-placed Northampton’s home game against the Bears on Sunday (15:00 GMT).

“The stats will show we had a lot of possession and territory.

“We have probably won a lot of things like carries and line-breaks, but without the ball we gave away a lot of silly penalties which them the opportunity to build the score and take the game out of our hands.

“We didn’t capitalise on the opportunities we had close to their goal line.

“It was not a lack of heart, commitment and effort – it was poor decision-making, our contact skills and discipline which took the game too far for us.”