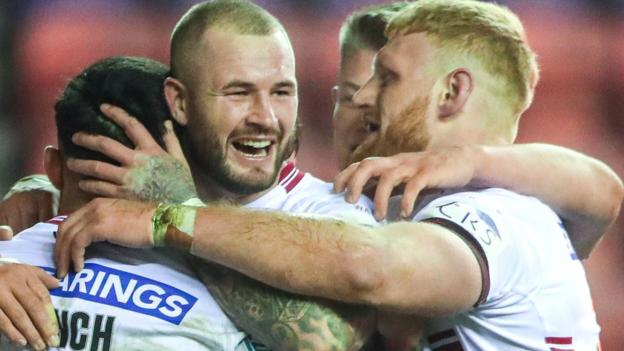 Wigan scored six tries as they beat a depleted Toronto who remain winless in their debut Super League season.

Toronto made a great start to the second half with Bodene Thompson’s try, but a fantastic counter-attack by the Warriors saw Joe Burgess power over.

The Wolfpack, who were without Sonny Bill Williams as he has returned to New Zealand for the birth of his fourth child, have now lost their opening three Super League matches, while Wigan have won two of their first three games after beating Warrington on opening day before losing to Castleford last week.

Toronto, who have opened the scoring in their two previous matches, did so again as Russell dived over after a cross-field kick was batted back by Ricky Leutele.

That conceded try saw a sluggish Wigan suddenly burst into life as Smith spotted a gap in the defence to go over and French danced through after a pass from Liam Farrell to put the hosts ahead.

A well-worked move saw Thompson race over the line as Toronto tied the game at 10-10 early in the second half and they came close to going in front, but Wigan turned defence in to attack in an instant and Burgess ran 50 metres to score.

French scored his second try as he went over following a swift Warriors move down the left and after Hakim Miloudi was sent to the sin bin for the second successive game, Farrell scored two tries in two minutes to complete the Wigan victory.

Wigan captain Sean O’Loughlin was taken to hospital after sustaining an eye injury in his 400th Super League match.

“I never got nervous today, I’m just really pleased we ticked the boxes we wanted to do in attack and defence.

“Our defence has been pretty good in the first three weeks. My priority is defence and, as the season goes on, my philosophy is to play rugby.

“We haven’t really seen that in the first three weeks but that’s ok. That will improve as the weeks go on.”

“It was a bit of a challenge but since round one we’ve improved and tonight we improved again.

“I like how we play and I like our attitude. There was a whole host of momentum against us but we managed to get back in the game.

“In many respects, I’m pleased where we are. We are improving week on week, but we certainly need to get better as well.”

Walker: Tatum 'best player on the court' vs. Clips