Inside Hoda Kotb’s Private World: Her Amazing Journey to Motherhood

Time is tight. Between 3:15 when Hoda Kotb‘s alarm rouses her awake and 7 a.m., when she takes her seat at the Today show desk—the spot she’s shared with Savannah Guthrie since Matt Lauer‘s ouster in November 2017—the co-anchor has to walk her dog Blake, hit the gym, guzzle a green juice, shower and make her way through hair and makeup on the show’s New York City set.

But she always pauses for one key ritual: Using the journal and pen she leaves out on her table, “I write three things I’m grateful for and one great thing that happened in the last 24 hours,” she told Inside Chic. Not every item has to be momentous, “For example, I had a meaningful conversation with a stranger on the street,” she noted. “Or I’m running in the park and I’m about to stop, when an old guy throws his fists up and yells, ‘Keep going, keep going.’ You go, ‘Oh my God, yes, I’m going to keep going.'”

The practice, she explains, forces positive thinking. Explained the veteran journalist, “You start looking for the good things in the course of your day.”

Naturally, these days she needn’t look too far to find her dose of Joy. While the 55-year-old’s career has been on a particularly sharp ascent the past decade, for Kotb nothing tops time spent with her Valentine’s Day baby, 3-year-old Haley Joy Kotb. “I would take my worst day, the day when everything’s falling apart, since Haley, over my favorite day before” she asserted during a January 2018 appearance on The Ellen DeGeneres Show. “She changed everything.”

Since then, she’s added a dose of hope with the April 2019 arrival of her second daughter, Hope Catherine Kotb. “It’s a girl!” she shared with her colleagues, calling into the show with the news that was a surprise to everyone except Guthrie and Kotb’s new fourth-hour cohost Jenna Bush Hager. “Man, I’m so happy she’s here.” 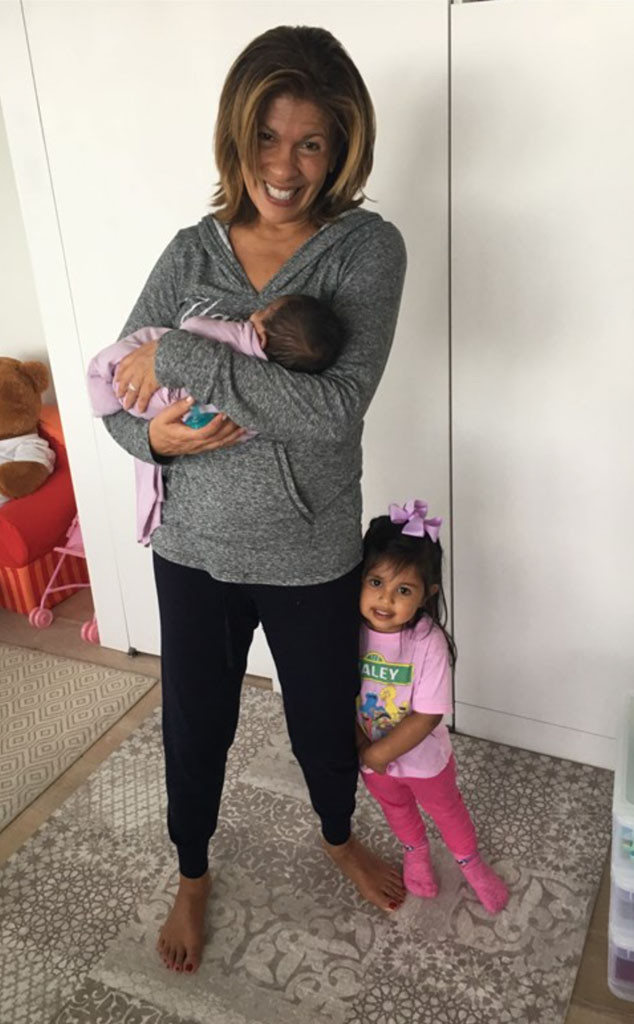 A self-described optimist, the Oklahoma-born, West Virginia-raised newswoman moves through life with deep gratitude. But every time she heard that question, it felt like a tiny stab to the heart. Never mind that she knew the strangers who asked meant no ill will. Or that she responded gracefully to the inquiry, noting, no, she didn’t have children, but she simply adored nieces Hannah and Ella. Still, “I felt a little ouch inside,” she told E! News, “because I felt like something was missing.”

A 2007 battle with breast cancer left her stronger, but unable to have kids. “Every time I swallow those pills, the pills are doing two things to me,” she said at the time of her course of treatment. “They’re fighting my cancer and they’re taking away any opportunity to ever have a kid.”

That knowledge was quite literally tough to swallow. “It’s hard to choke them down,” she said. “But I take them every day, every night…It’s all weird because part of me feels sad and part of me feels like I got this new beginning.”

Despite that heartbreaking ritual, Kotb accepted her reality so readily she even considered abandoning her flourishing television career—she’d come to NBC News in 1998 after spending a decade bouncing from Illinois to Mississippi to Florida to Louisiana as a local news correspondent—for the opportunity to spend more time with children as a teacher or summer camp director.

But she couldn’t completely quell the tiny voice inside that whispered her own child was out there, somewhere. “I saw here before she was present, I felt her being,” she told E! News. (In fact, that sensation led her to the name of her children’s book, I’ve Loved You Since Forever.)

And why shouldn’t she be allowed to have the one thing she’s always wanted? After all, she’d taken what she called “a risky move” by falling in love again after a short-lived marriage to University of New Orleans tennis coach Burzis Kanga and a two-year romance with Jay Blumenkopf. A chance night out led her to 61-year-old financier Joel Schiffman and a relationship she treasured so dearly, she referred to him on-air simply as Boots for two years to protect their union.

“Finally I said to myself one day, ‘Why can’t I? Why not me?'” she recalled to People in 2017 of deciding to move forward with adoption. “I had this ache in me that I couldn’t push away anymore.”

Broaching the subject with Schiffman—already a dad to a grown daughter—was terrifying. 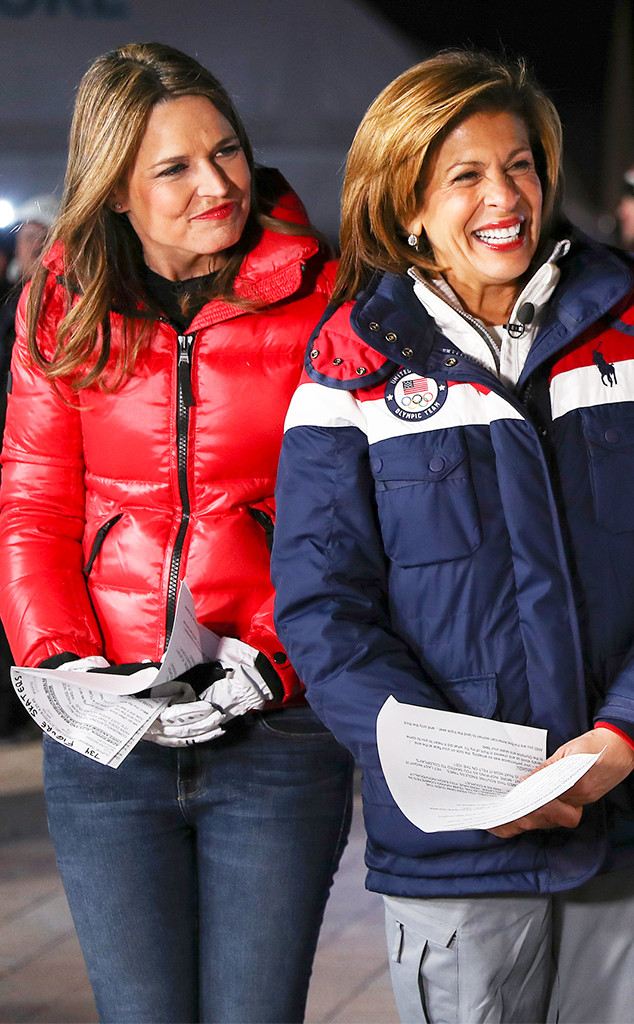 “I was afraid to even say it out loud, because then it felt so real,” she recalled to People. After she revealed that she’d like to adopt a baby with him, “I said, ‘Think about it for a day or a week or whatever.'” His response left her floored—and confident she’d found the perfect partner. “He said, ‘I don’t need a day. Let’s get this journey going,'” she said. “At that point I blubbered like a baby. It was like the dam burst.”

In fall of 2016—as she and Schiffman were moving into their first apartment together—she started the application process. “They said, ‘We can’t make any promises. We wish you good luck,'” she told E! News. That’s when she turned to her trusty journal, jotting down the same words over and over. “Every night I scribbled, ‘Please God, if you can…'”

She remembers the moment that prayer was answered. The exact moment.

Sitting in her New York City office that winter morning, she was mid-FaceTime with a subject for a story when a text came through from a contact she’d saved as Ashley Project. Understandably wanting to keep the process under wraps, she’d told only her family, then-cohost Kathie Lee Gifford and a few other friends, “So I used the word project so I wouldn’t slip up and say adoption,” she explained. 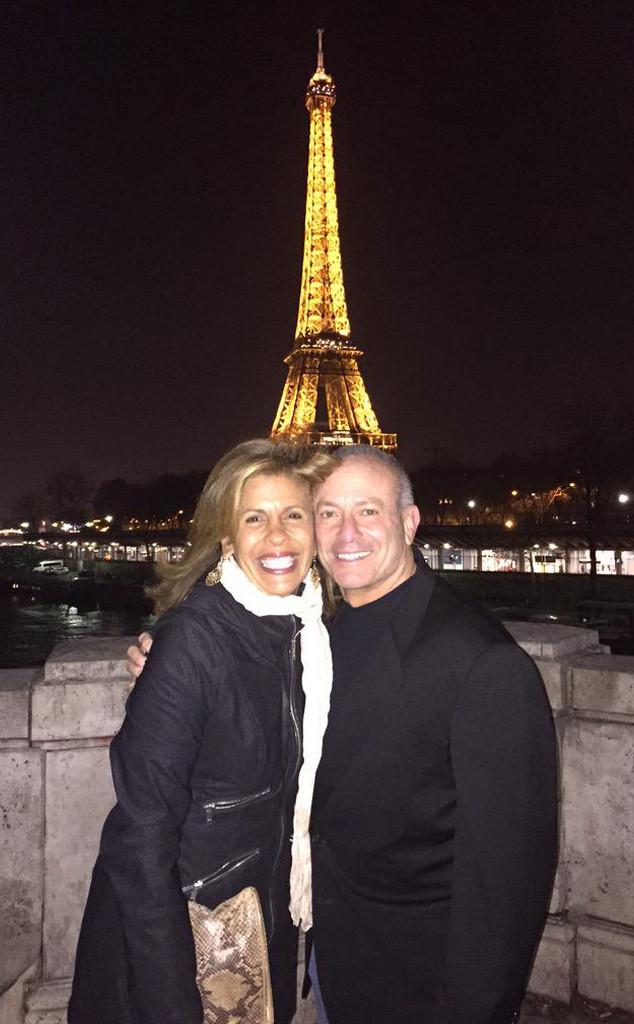 The message had just two words: Call me. Kotb quickly ended the convo, looked at the clock and jotted down the time, 11:54 a.m. “I knew that that was the minute it was changing,” she explained to Ellen DeGeneres. “I just felt it.”

She and Schiffman, her now-fiancé, celebrated that Valentine’s Day with the new love of their lives. “You think that by a certain stage in your life, I’ve had every experience that I’ve had, and then all of a sudden she shows up,” she told Today. “I felt like in my life, I’ve had joy beyond what I could have imagined, but this is beyond a dream. Like, you had your dreams—and then this. I never believed in love at first sight until now.”

For a month she and Haley Joy (named after Halley’s comet because “I just picture her sailing through the sky,”) holed up in their penthouse on New York’s Upper West Side where, she told People, they “ate and slept and burped and took naps.”

To avoid having to leave—with exceptions made for doctor appointments—baby necessities were ordered in. (Kotb explained them away to her doorman by saying she was hosting a shower.)

Until one day, she ran out to grab something from nearby drugstore Duane Reade. “A lady just stopped me on the street and she said, ‘Oh, hi,’ you know, something about the Today show and I said, ‘Oh, hi,'” Kotb recounted to E! News. Then, she received the question she’d heard endless times before. “She said, ‘Do you have children?'” remembered Kotb. “And I just looked at her and said, ‘Yeah,’ I said, ‘I have a daughter.'”

The moment turned her into “a weird basket case” she admitted. But she could hardly be bothered by the fact that she was sobbing on a street corner. “For the first time I said the words out loud that I had hope I would say one time in my life,” she said. “And it was awesome.”

Countless awesome moments followed, ranging from the extraordinary (baby’s first Today appearance!) to those milestones that seem quite ordinary, until they’re happening to you and you’re watching your own child stand or call out to Dada.

Take the time Haley attempted her first, slightly staggering steps. “One day, seriously, she took a nap, she woke up and she started walking,” Kotb relayed to DeGeneres. “Like, I didn’t even know when it happened or how it happened. She was like, ‘Ok, bye!'”

Or when Kotb first heard her belly laugh, a melody she’s since described as the “sweetest sound on the planet.” Even Haley’s teething and the long, restless nights that accompanied it were, well, a joy. As she explained to E! News, “I’ve slept for 53 years.”

While Kotb acknowledges there may be drawbacks to becoming a first-time parent in your fifties, “I don’t even care about those,” she told E! News. “What I know is when you want something and you’ve waited a long time, every second counts. Every moment in time, you’re like, ‘Oh my gosh,’ and you savor it in a way that I’m not 100 percent sure I would have had I been a young mom.”

Though that means it’s a struggle to be away from Haley—when Kotb covered the Winter Olympics in Pyeongchang, South Korea she strapped one of her daughter’s tiny shoes to her backpack and toted a stack of pictures and a burp cloth—she’s also able to find the positives in even the most trying of parenting fails.

“You’ve seen tough times in your life, so you have more tolerance,” the Dateline NBC alum explained to Us Weekly last year, recalling an incident when Schiffman was out of town and she was trying to let pup Blake outside and feed Haley at the same time. “The dog knocked over a picture,” said Kotb. “She’s crying, he’s barking, there’s poop on the floor, glass is broken. I was like, ‘I might have a breakdown.’ Then I remember thinking, ‘I would have begged God for this.'”

With days spent dancing (Haley loves “Despacito”, she told Us Weekly, but “she recently started dancing to a Nationwide commercial—she’s like her mother, she’ll dance to anything!”) and nights cuddled in bed reading Goodnight Moon, Cat in the Hat and Kotb’s own tome (“She’s at the stage where she’s ripping out the pages,”) Kotb feels so #blessed she couldn’t possible want for more.

Because Kotb has had a good run of late, Hope’s arrival quickly followed by a proposal from her longtime love Schiffman during a November getaway.

During their dinner on the beach, “I was eating the churros,” she recalled. “I was licking the bottom of the bowl. And he was like, ‘I have something else I’d to say.’ He said some beautiful things and then he got down on one knee and he said, ‘Will you be my wife?'”

Already putting together her vows, likely an intimate beach affair, she sometimes gets blown away by the enormity of her gratitude. “Isn’t it so crazy how your life throws everything at you in different ways?” Kotb mused during an appearance on E!’s Pop of the Morning January debut. “I was literally just sitting there the other day…we were downstairs and our girls were upstairs asleep and I thought, ‘Man, if anyone has blessings that they wonder like, when are they coming? If anyone does…your time is coming, you just don’t know when.'”

Still, she’s daring to hope for just a little bit more. Her and Schiffman’s age had motivated her to welcome Hope into the fold. “When you’re parents later in life, watching Haley and Hope together, all I really want is for them to have someone to hold their hand forever and that’s it,” she explained. “That’s all I want. I was scared ’cause we’re older…but then I realized, like, they’ll have each other.”

Always look for the good.

(E! and NBC are part of the NBCUniversal family)