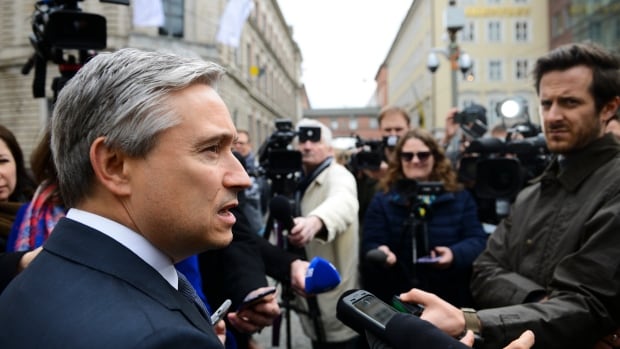 Foreign Affairs Minister François-Philippe Champagne reported progress today in securing a thorough investigation of the destruction of Ukrainian Airlines Flight 752, after meeting his Iranian counterpart Javad Zarif on the sidelines of a security conference in Germany.

Prime Minister Justin Trudeau also briefly joined the Munich meeting — a break with protocol, which usually holds that prime ministers do not attend meetings at the foreign minister level. Canadian government officials said he attended personally to send a message about how seriously Canada takes the investigation.

In a previous meeting with Zarif in Muscat, Oman on Jan. 8, Champagne kept the tone businesslike. A photo issued by the Iranian government appeared to show a meeting that was tense, if not confrontational.

But after the Munich meeting, the Iranian foreign ministry released a photograph showing a smiling Trudeau shaking Zarif’s hand and gripping his elbow. Champagne appears in the same photo with a more neutral expression. Canadian news photographers were not allowed into the meeting.

It didn’t take long for some Iranian-Canadians to take to social media to criticize the PM’s demeanour in the meeting as overly friendly, given that he was engaging with a representative of the country responsible for the missile attack that killed dozens of Canadians last month.

Look, I get that leaders sometimes have to shake hands with unsavoury people. But Iran just killed 63 Canadians. <br>Maybe the PM could’ve avoided this particular photo op. Maybe a UNSC seat isn’t worth a firesale of every last thing Canadians hold dear. <a href=”https://t.co/Qdt4Yin7or”>pic.twitter.com/Qdt4Yin7or</a>

Not a good look to see PM Trudeau with smiling FM Zarif of Iran after Canadians killed at the hands of Iranian incompetence and malice on Ukrainian plane- not to mention the innocent Iranian protestors‘ killed. <a href=”https://t.co/gWvNyNFQca”>pic.twitter.com/gWvNyNFQca</a>

Champagne told Canadian journalists that the Iranians no longer appear to be arguing that the “black box” flight data recorders from the downed aircraft need to be analyzed in Iran.

Iranian officials previously insisted that other countries’ experts conduct the analysis in Iran. Champagne said Canada and Iran are now talking about delivering the black boxes to Paris.

“In our first discussions with Iran, it was about, ‘How can we acquire the capabilities to do the download and analysis in Iran,” Champagne said. “After 30 days, one has to come to the conclusion that that capability does not exist in Iran, and therefore we need to find another path forward.”

The ayatollahs’ regime has been insisting on its right under Annex 13 of the Convention on International Civil Aviation to conduct the analysis in Iran.

“We understand the norm under Annex 13 that says the country where the crash took place has the right to do that exercise,” said Champagne. “But I would say that when you have more than 30 days after the crash, Annex 13 also calls for the download and analysis to be done without delay.”

He added that in order “to respect the spirit and words” of Annex 13, it’s necessary to get the black boxes out of Iran.

The meeting in a hotel in the historic centre of Munich was the second between Champagne and Zarif since Iranian missiles brought the plane down. The first meeting was on January 8 in Oman.

Champagne said he told Zarif that a proper investigation is Iran’s best chance to prove wrong those who believe the attack was intentional, adding that he has told the Iranians more than once that the best antidote to conspiracy is transparency.

The foreign minister spoke on the street in Munich on the 37th day after Flight 752 was shot down by Iran’s Revolutionary Guards Corps (IRGC) — an act initially denied by the Iranian government. Champagne told Ukrainian journalists that the black boxes are “Ukrainian property” and Canada will continue to support Ukraine’s legitimate rights in the case.

Iran says it has made arrests in the case, but little is known outside the country about who is being held or what charges they face.

What is clear is that the commander of the IRGC’s air defence corps, Brig.-General Amir-Ali Hajizadeh, has not faced criminal consequences. Although he reportedly said that he wished he were dead after the IRGC owned up to its role in the crash, he soon after appeared at Friday prayers in Tehran, standing close to Supreme Leader Ali Khamenei — a clear sign the regime intends to stand by him.

The question of compensation

Champagne said he also discussed the topic of compensation with Zarif, something he said he raises at every meeting with the Iranians.

“We have been adamant, and I think the Iranian counterpart understands, that there should be full, fair compensation for every citizen that lost life on that plane,” he said.

Iran, however, has not been willing so far to go beyond an initial offer of $80,000 ($106,000 Cdn) per victim, an amount dismissed by other countries as completely inadequate.

Earlier this week, Zarif dismissed a private lawsuit brought by a Canadian family for $1.5 billion Cdn, saying it “lacks any legal basis.”

Iran also refuses to recognize dual citizenship and regards most of the 57 Canadians killed in the crash as citizens only of Iran.

Champagne said today that Iran’s position on citizenship has not impeded Canada’s ability to offer consular services to victims’ families, or to repatriate remains to Canada.

Iran’s position may still complicate talks over compensation, however — if Iran refuses to recognize Canada’s standing as a party to any negotiations, or if it attempts to offer lower amounts of compensation for Iranian citizens.

Families of victims who held only Iranian citizenship may have little recourse but to accept the sum offered by the Iranian regime.