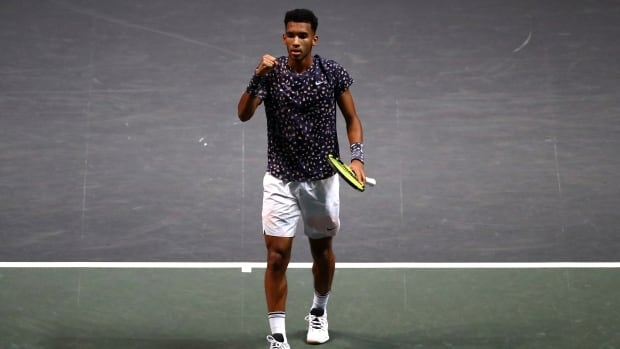 Canada’s Felix Auger-Aliassime is heading to the semifinals at the Rotterdam Open tennis tournament.

The 19-year-old from Montreal battled through illness to beat Slovenia’s Aljaz Bedene 6-4, 7-6 (6) in quarter-final play at the ATP Tour 500 indoor hardcourt event on Friday.

It marks the second semifinal appearance of the year for Auger-Aliassime, who is ranked 21st in the world. He’ll face No. 30 Pablo Carreno Busta after the Spaniard saved two match points to beat Italy’s Jannik Sinner 7-5, 3-6, 7-6 (6).

Against the 52nd-ranked Bedene, Auger-Aliassime had 10 aces and just one double fault. He won 80 per cent of points when he got his first serve in.

Despite several on-court coughing fits, Montreal’s Felix Auger-Aliassime beat Aljaž Bedene 6-4, 7-6(6) to advance to the semifinals of the Rotterdam Open. 1:26

Auger-Aliassime saved one set point in the tiebreak.

The Canadian let a 3-0 lead slip away in the second set before rebounding to win the tiebreak.

“In the second set, I was a little bit frustrated with myself how he came back and I gave away too many free points,” Auger-Aliassime said.

“I felt like he was playing better and better, and I had to accept the challenge. The tiebreak could have gone so many ways, but I am happy with the way I fought.”

Auger-Aliassime is searching for his first career ATP Tour title. He made it to three finals last year in his first full season on tour.

In doubles, Denis Shapovalov of Richmond Hill, Ont., and Rohan Bopanna of India are off to the semifinals after beating Jean-Julien Rojer of the Netherlands and Horia Tecau of Romania 6-2, 3-6, 10-7 on Thursday. The duo will face Henri Kontinen of Finland and Jan-Lennard Struff of Germany on Saturday.