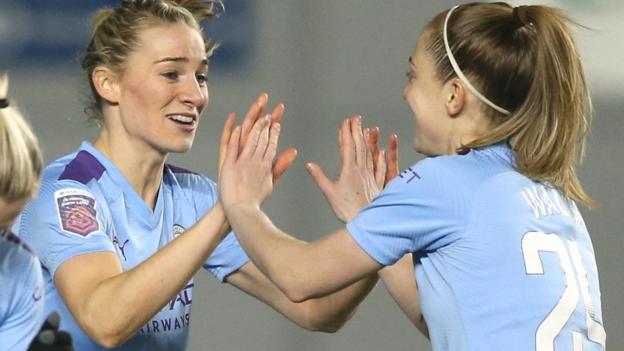 Gemma Bonner, one of nine England internationals in the hosts’ starting line-up, hooked in Caroline Weir’s free-kick to score inside two minutes.

Sophie Baggaley made saves from Jill Scott, Bonner and Weir at the start of the second half as Manchester City chased in vain for a second goal.

However, while frustrated in attack, they rarely looked like conceding an equaliser and a sixth successive WSL victory keeps them one point clear of second-placed Chelsea, who beat Birmingham on Wednesday.

Manchester City have scored 17 goals in that run of wins, while Bristol City have now lost nine of their 13 league matches this term.

They remain level on points with second-from-bottom Liverpool, who host reigning WSL champions Arsenal at Chester on Thursday, but will be encouraged by their showing in Manchester.

With Bristol City having let in 37 goals in their first 12 league matches, onlookers might have feared the worst for the visitors once centre-back Bonner had poked the home side in front so early in the contest.

Instead, Bristol City responded well, enjoying a decent spell of pressure immediately after the goal but without seriously testing home goalkeeper Ellie Roebuck.

Manchester City’s England striker Ellen White was kept largely quiet by the visitors’ defence, although Gemma Evans was called upon to make a last-ditch interception after White had rounded goalkeeper Baggaley.

Watching the match from afar was Cushing, whose ended his reign of more than six years as Manchester City boss earlier this month to become assistant manager of men’s team New York City in the MLS.