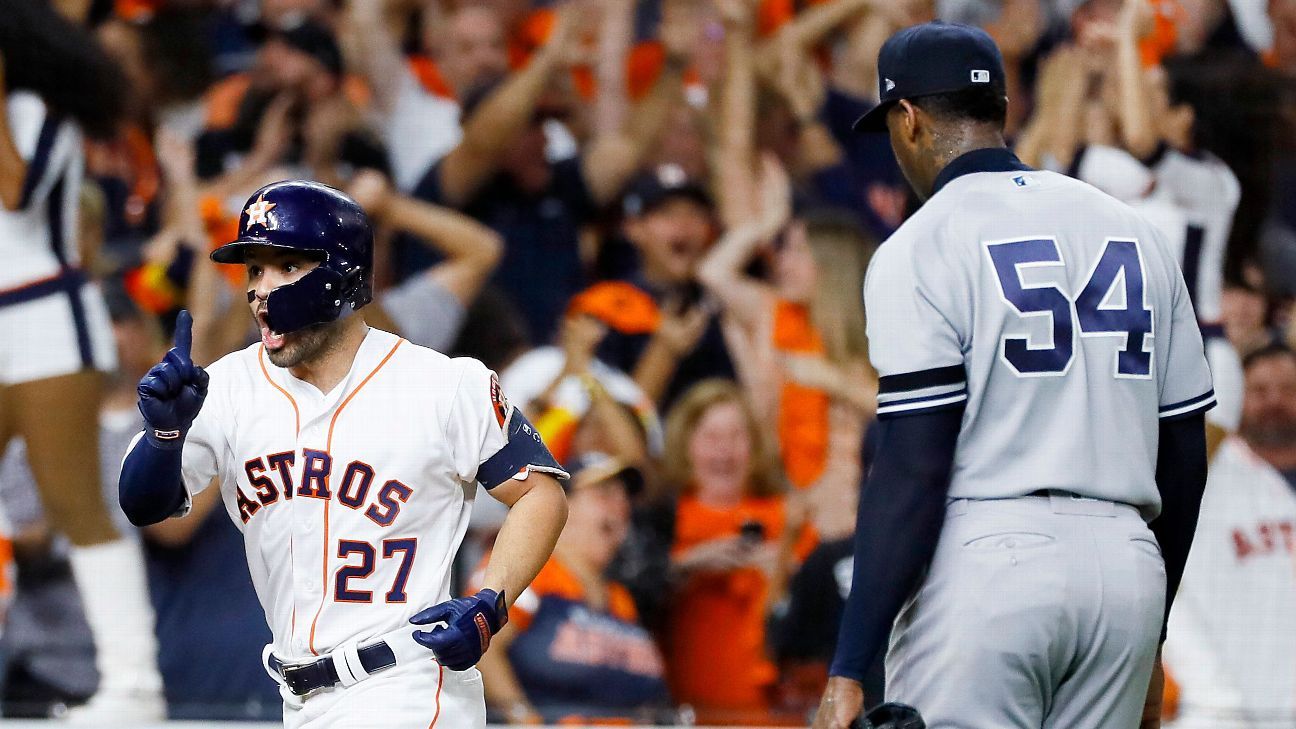 TAMPA, Fla. — Yankees reliever Aroldis Chapman joined the chorus of players criticizing the Astros for their sign stealing, and speaking through an interpreter, he called the actions of the Houston’s Jose Altuve at the end of the 2019 American League Championship Series “a little suspicious.”

Chapman was also part of the Yankees team beaten by the Astros in the 2017 American League Championship Series. But in the final game of the 2019 ALCS, Chapman threw an off-speed pitch that Altuve hit for a series-ending walk-off home run. As Altuve rounded third base, he clutched at the collar of his shirt, yelling at teammates to not rip off his jersey — actions that have since raised speculation about whether he may have been wearing some kind of wire that tipped him off to the identity of the forthcoming pitch.

Chapman reiterated Thursday morning that he bore the responsibility for the result, as he was the pitcher who threw the ball. When pressed, he added, “I’ve seen that video — a lot of people have seen that video; it’s a popular video right now,” Chapman said, with a slight hint of a smile.

“A lot of people are disappointed with the situation. That’s why the commissioner did an investigation. … Hopefully, they take the right actions. I just feel that they put baseball in a bad spot. A lot of people have suffered because of it, because of what they did, and what came out of it.”

In the aftermath of the discipline handed down on the Astros for the sign-stealing, CC Sabathia and Masahiro Tanaka have said they felt cheated out of the opportunity to play in the 2017 World Series.

“I believe so, too,” Chapman said. “It was very close, going back to 2017. With everything, all the details that have come out, it was the extra edge that allowed them to move on.”

Chapman complimented former Astros player Marwin Gonzalez, now with the Twins, for Gonzalez’s recent apology for what happened in 2017.

“I gotta say, for Marwin to take that step, takes a lot, to come out and apologize to everybody publicly,” he said. “It takes courage to do that. That’s an example for all of those guys. At the end of the day, the findings of the investigation are there, there’s no hiding about that. I think they should follow his steps and take some actions.”

“At the end of the day, you really have to apologize to the fans. They are the ones watching and seeing everything that has developed. You put baseball in a bad spot, and it’s time to take some actions and some responsibility.”

Kap will 'tell the story of my evolution' in memoir