‘Who’s not looking for love?’ Not the Niagara Falls mayor, despite ‘dozens’ of fake profiles and ads 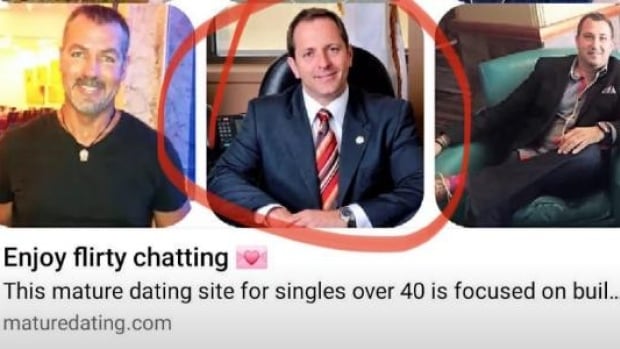 The mayor of Niagara Falls says his face has shown up on dozens of dating websites and ads since he took office. The only problem is, he’s never tried to find love online.

On Wednesday Jim Diodati decided to fight back, sharing a screenshot of an ad for MatureDating that feature him looking sharp in a suit and tie along with the smiling faces of eight other men.

“Please be warned.. this is a fake. This photograph of me is not being used with my permission,” he wrote, adding the ad had been reported to Facebook.

That image is just the latest in a long string of romantic profiles and online plugs that have tried to cash in on Diodati’s good looks.

He’s been serving as mayor for nearly a decade and in that time he estimates he’s heard from people all over Canada and the U.S. who recognized his familiar face.

“It’s funny. On one hand you feel invaded and on the other hand you’re flattered,” the mayor said.

Most of the pictures are readily available online for anyone who carries out a search for his name.

The picture used in the MatureDating ad is actually his official portrait, which was taken a few years back and currently hangs along with pictures all of the city’s other mayors.

Diodati typically finds out about them when someone contacts his office email or phone and said his office has always reported what was happening to whoever runs the website in question.

In the past he’s reacted to his internet imposters with a shrug, but in the past week the frequency of reports about his picture being used have picked up, including a Plenty Of Fish page in the Boston area.

That and the fact some of the profiles started using pictures of his family is what he felt crossed the line and prompted him to “fight fire with fire” and expose the ad trying to profit off his appearance.

“When they were using my kids and my dog on some ads and on dating sites making it look like this was them and their family, that started to get creepy,” Diodati explained.

He added the thing that leaves him scratching his head is how exactly someone hopes to land a date using his photos — won’t whoever they take out notice they don’t look like their photos, not to mention that they don’t have a dog or kids?

“To me it’s not going to go anywhere good for them. I really don’t understand the psyche of a person that does this.”

Quiet walks on the beach?

The main beneficiaries of Diodati’s unwanted internet presence seem to be his family and friends, who have spent the past few days ribbing him mercilessly.

“I’ve had good buddies of mine … saying ‘I didn’t know you like quiet walks along the beach,'” he said. “I’m trying to look at the light side of it, have some fun with it, not take it too serious.”

As a single father of three teens, not to mention the mayor of a bustling city, Diodati said his hands are pretty full.

That’s not to say he’s not interested in romance, mind you.

“Who’s not looking for love?” he asked with a laugh, but quickly added he’s never been on a dating site.

As for the possibility one of those ads or fake accounts might actually lead him to someone special?

“What do they say in politics? ‘Any news is good news, just spell my name right,'” Diodati joked. “I’m going to have to go with that one for now.”

Lowe: How two contenders went all-in at the trade deadline