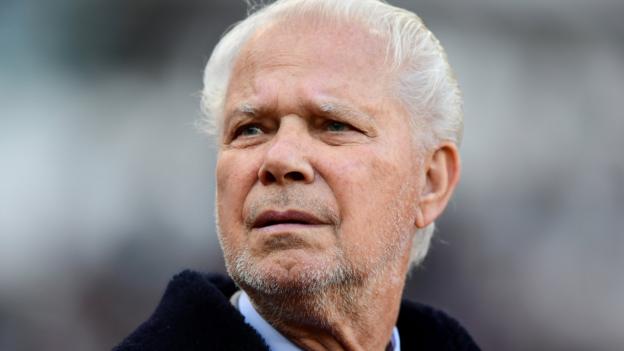 It comes after the home of Manchester United executive vice-chairman Ed Woodward was attacked by a group chanting that he was “going to die”.

Gold has previously been targeted by fan protests.

“I know exactly what Ed’s experienced. I’ve experienced it four or five times myself,” he said.

“What you’ve got to understand is that it is by a minute percentage, a couple of hundred people.”

Gold added: “In my mind you’ve got a couple of hundred belligerents who want to, metaphorically, burn your house down. And those 200 will gather people who are listening, or walking by and wonder what it is all about.”

On Thursday it was announced that fans who behave in an “unacceptable” manner towards players, supporters, club employees or referees will face a Premier League-wide ban.

“The league will come together as a unit to protect the likes of Ed and punish those perpetrators. It cannot be tolerated,” said Gold.

“Manchester United are a big club, Ed Woodward is a big figure in the game. He cannot be worried about his wife and children.”

During the disturbances at West Ham’s game against Burnley at the London Stadium in March 2018, for which the club was fined £100,000, Gold said his 10-year-old granddaughter asked him whether he was a liar.

He said: “The Burnley game was dreadful. My 10-year-old granddaughter said: ‘Grandpa, what do they mean? You’re not a liar, are you grandpa?’ I mean, what do you say to a 10-year-old?”

West Ham are bracing themselves for more fan protests in coming games.

There is an atmosphere of mistrust between many fans and the board, particularly Gold, Sullivan and vice-chair Baroness Karren Brady, who they accuse of betraying promises made when the club moved into the London Stadium in 2016.

With the club now in the relegation zone before Sunday’s trip to Manchester City – the start of a tough run of fixtures that includes visits to Liverpool, Arsenal and Tottenham, plus home games against Wolves and Chelsea – the Hammers’ top-flight future under new boss David Moyes is precarious.

“The story is that we are liars. That we have taken all the money. That is wrong,” said Gold.

“We are not liars. We have made mistakes. David Sullivan is not a bad person. He wants the club to be successful. Karren Brady works her socks off for the football club. And then you read these terrible things.”

Gold says criticism of West Ham’s controversial move from Upton Park is misplaced, that the reason behind it – to move the club forward – remains the goal and that owning the club was “a dream come true”.

“Do I look like I’m in it for profit?” he said. “I’m the kid who grew up in a life of poverty and used to bunk into West Ham.

“I have not received a penny in salary or expenses from West Ham in 10 years. I know of owners or chief executives that are earning £3m a year.

“All my young life, the club was in the old Second Division. We are in the Premier League now. OK, we’ve got a few problems but overall we’re moving upwards. There have been a few difficulties with the stadium but the one we have now holds 60,000.

“I spoke to a cab driver on Wednesday who spent half an hour saying how he was thrilled with the stadium and how his kids love it. But is he on the television? Is he in the paper? No. All that’s in the paper is the guy that wants to kill me or burn my house down. That’s the problem.”