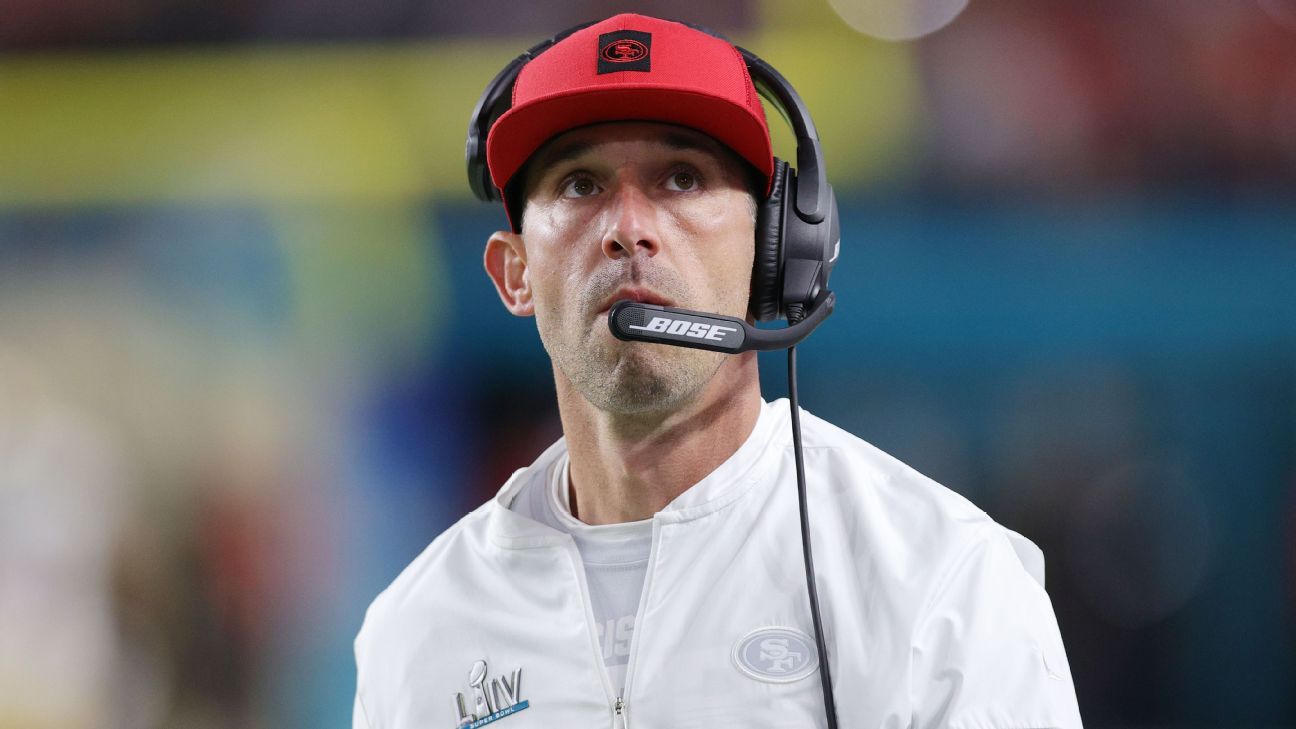 SANTA CLARA, Calif. — San Francisco 49ers coach Kyle Shanahan doesn’t use social media, but in the wake of his team’s disappointing loss in Super Bowl LIV, he has a different method for gauging criticism levied against him and his team: text messages.

Speaking alongside general manager John Lynch at the Niners’ year-end news conference Thursday, Shanahan said he had about 200 text messages after San Francisco’s win against Green Bay in the NFC Championship Game — most telling him how great he and the Niners were.

After coughing up a 10-point lead to the Kansas City Chiefs in the fourth quarter Sunday, Shanahan had about 200 more messages — most asking how he was doing or if he was OK, or people saying they still believed in him.

Through it all, Shanahan has no regrets about how he called and managed the game and insisted the ensuing criticism won’t affect him.

“I don’t feel it’s intense blowback,” Shanahan said. “I’m not on Twitter or whatever all that stuff is, but I would never do that to myself anyway. I’ve lost a Super Bowl before and I’ve been a part of a bigger lead that was lost, so I’m very well aware of what goes with that. But I’m also not a good liar. How you guys hear me talk is exactly how I feel. I’m real upset about the loss because it’s hard to get there.

“I personally thought we had the best team in the NFL this year. And we weren’t, and we’ve got to deal with that. But I’m sure we believe we had that and we should have proved that and we didn’t get that done. And that’s what’s really cool about sports, that’s what hurts about sports, that’s what’s fun about sports. It’s why I love sports and it’s also why everyone likes watching it, because there is a lot of emotion in there and when I do feel this way and stuff, I mean it, it makes me feel stronger because it does hurt a lot. But I also know how much I can deal with it. And if that’s the worst stuff that happens, I can’t wait to try our butts off to get back there next year.”

In the wake of the loss to the Chiefs, much of the blame has been aimed at Shanahan and quarterback Jimmy Garoppolo, which, as Shanahan points out, isn’t unusual given their job titles.

Many of the questions for Shanahan have surrounded how he handled the end of the second quarter. After San Francisco linebacker Fred Warner tackled running back Damien Williams for a 1-yard gain to set up a fourth-and-13 at Kansas City’s 49, Shanahan opted not to use a timeout with about a minute and a half to play.

Television cameras even showed Lynch signaling for a timeout from the suite where he was watching the game. Shanahan decided against it as Kansas City ran the clock down to 59 seconds before punting.

On Thursday, Shanahan insisted he would handle it the same way. His concern was Kansas City punter Dustin Colquitt would pin the Niners at the 1, then the Chiefs would use their timeouts and score before the half.

Colquitt’s punt was nearly downed inside the 5, but Kansas City couldn’t quite make the play, giving the ball to the Niners at the 20.

From there, Shanahan said he was hoping to pop a long run on first down, which would have allowed him to be more aggressive but at worst would keep the clock running. Were it not for an offensive pass interference call against George Kittle that nullified a 42-yard gain, the Niners still likely would have at least managed a field goal before the half.

Regardless, they were able to go into the locker room tied at 10 with the ball to start the second half — an outcome Shanahan was happy with after what he called “mistakes” he made in a midseason loss to Seattle that ultimately led to a loss there.

“I called a run,” Shanahan said. “I don’t think that’s not aggressive. I call runs sometimes on third-and-10, and I think we were averaging about 7 yards per carry at the time. I liked the run call. It also guarantees that the clock will be running after it. … So that one, I’m very confident in what happened there. I would do that over every single time, especially when you are getting the ball in the third.”

Asked if he had any calls he would like back from the game, Shanahan said he did not, though in hindsight he said he would’ve liked to call timeout after a long third-down pass intended for Emmanuel Sanders fell incomplete to regain some energy for fourth down. He opted not to use it, knowing that if the Niners didn’t get the first down, they’d need all three timeouts to potentially get the ball back.

Shanahan also offered support for Garoppolo, who posted a QBR of 5.6 in the fourth quarter — tied for the lowest in any quarter during the postseason (minimum of 10 attempts).

Shanahan said he feels the same about Garoppolo as he did “the day before the Super Bowl,” noting he believes his quarterback was on his way to Super Bowl MVP before the final few drives.

“Jimmy is one of the main reasons we got to the Super Bowl,” Shanahan said. “He overcame a lot. This was his first year in his career going through an entire NFL season, so he still doesn’t have as many starts as Baker Mayfield. He had a hell of a first year truly playing the position, especially coming off an ACL.

“You have to fight through that as a quarterback where your rhythm and everything is not there at the beginning of the year. And for him to be like that and to not let the pressure get to him and to improve as the year went I think says a ton about Jimmy and I can’t tell you how much I loved coaching the guy as a player and as a person this year.”

Before saying their goodbyes to the team Wednesday, they made it a point to discuss how far they had come in 2019, inviting players to offer their favorite memories and turning a scheduled 15-minute meeting into one that lasted upward of an hour.

“I think something that’s important and something we talked a lot about as a team, is let’s not just do away with what a special season that we had and let’s not just forget that,” Lynch said. “There’s not many teams that go from four wins to 13 and dominate the NFC in the playoffs to get there. So we believe this team is different and we believe we’re capable of doing that.

“We have to own the disappointment, but some of the things being said, I think this group is very strong in terms of who we are. And I know [Shanahan], in my mind, was the best coach in football this year. That last game, we have to all own what happened. Our guys like that. They’re gonna take that, put it on their shoulders, they’re gonna own it and we’re gonna move forward and we’re gonna be better from it.”