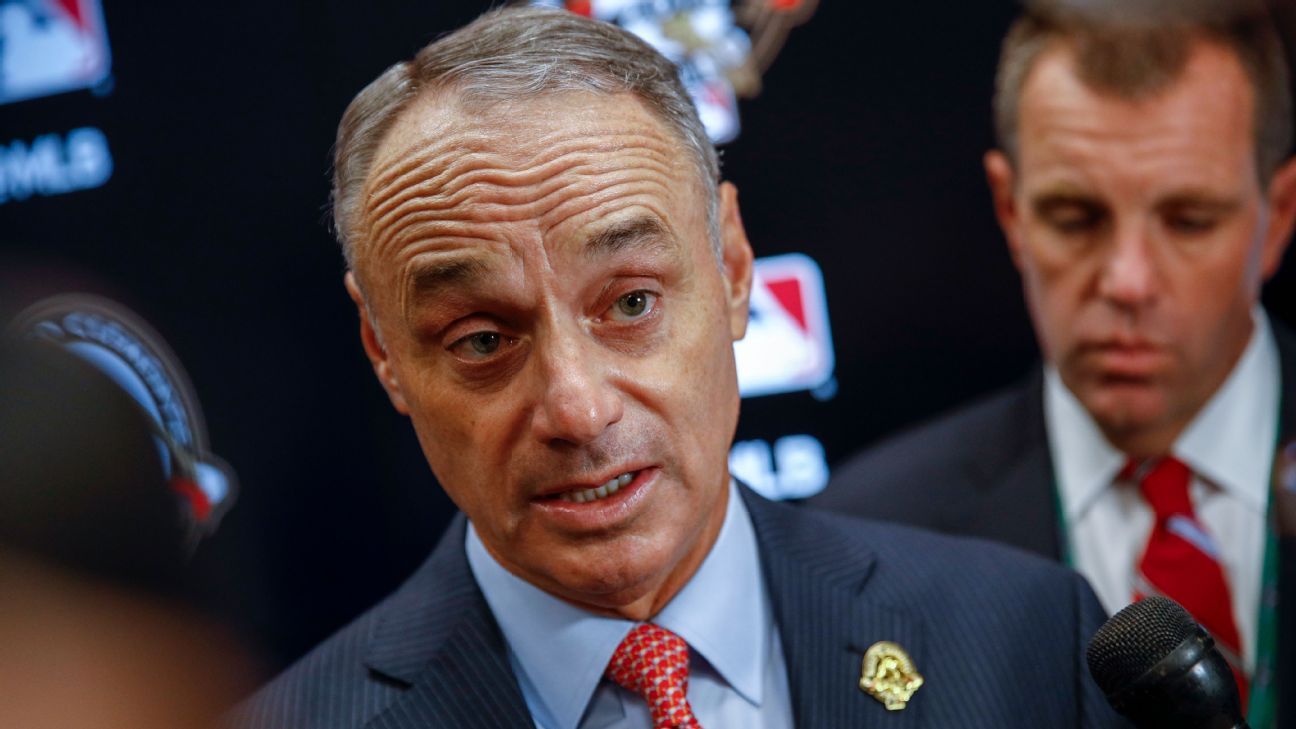 “I think you should assume that before the season starts we will have new guidelines with respect to the use of video equipment,” Manfred said Thursday after an owners meeting. “I think we have too much video available in real time right now.”

After former Houston pitcher Mike Fiers told The Athletic in November that the Astros used a video camera to steal the signs of opposing catchers in 2017 and 2018, Manfred last month suspended Houston manager AJ Hinch and general manager Jeff Luhnow for one season, fined the Astros $5 million and stripped them of their first- and second-round drafts picks in 2020 and 2021.

Hinch and Luhnow were fired the same day, and the scandal led to the departures of Boston manager Alex Cora, Houston’s bench coach during its 2017 title run, and New York Mets manager Carlos Beltran, an Astros player that season.

MLB is investigating a separate allegation that the Red Sox broke sign-stealing rules in 2018, when Cora led Boston to the championship in his first season as manager.

“I’m hopeful that I can get Boston done before the camps open,” said Manfred. Workouts start Wednesday.

Manfred did not punish any Houston players and said no Red Sox players will be sanctioned. But he left open the possibility of discipline for future violations.

“We have the right to discipline players right now. I’m absolutely convinced of that fact,” he said. “We made a decision in the Houston investigation that in order for us to get the facts that we needed, somebody had to get immunity.”

He was not disappointed by the failure of current Astros players to apologize.

“I think the jury’s still out on exactly what the Houston players are going to say,” he said, pointing toward spring training as the possible time and place for contrition.

Baseball has looked at earpieces as a way to avoid the use of signs but determined it would be impractical. While football uses earpieces, helmets are much larger than baseball caps.

“It’s much harder to design an earpiece that would be comfortable for players to wear in lieu of signs,” he said, adding, “it’s hard to be as fast as hand signals.”

Astros owner Jim Crane did not attend the meetings. He is playing in the Pebble Beach Pro-Am golf tournament along with pitcher Justin Verlander this weekend.

METS SALE: Manfred said that talks have ended over the proposed sale of a controlling share of the Mets from the families of Fred Wilpon and Saul Katz to hedge fund manager Steven Cohen.

COMPUTERIZED PLATE UMPIRES: Manfred said the automated balls-and-strikes system will have to be negotiated with the players’ union before it is used in the major leagues. MLB is using the system at nine ballparks of the Class A Florida State League this year and will test it during big league spring training without using it in exhibition games.

“It’s fair to assume that we’re going to continue to test at increasingly significant levels of play to make sure we’ve got it right before we bring it to the major leagues,” he said.

OLYMPICS: Manfred said MLB was discussing whether to make some 40-man roster players available for the Americas Olympic qualifying tournament in Arizona from March 22 to 26.

“The timing’s a little difficult there,” he said.

Using a team with no 40-man players and few top prospects, the U.S. was three outs from qualifying at the Premier12 tournament last November but wasted a ninth-inning lead to Mexico and lost in 10 innings.

“We are going to make every effort to field as competitive a team as possible,” Manfred said.

MINOR LEAGUE BASEBALL: Owners were given an update on MLB’s proposal to eliminate 42 minor league affiliates in negotiations for a Professional Baseball Agreement with the National Association of Professional Baseball Leagues, the governing body of the minors. Talks are set to resume Feb. 20. The current deal expires after this season.

“There is unanimous support among the owners for the objectives and the strategy that we’re pursuing with respect to this negotiation, in particular our objectives of modernizing minor league baseball, improving the working conditions of the players who play there,” Manfred said. “I’m hopeful that the minor league negotiating committee is able to get a consensus among its constituents, a consensus that’s strong enough that they can make us finally a written proposal that’s supported by their membership.”

GAMBLING: MLB may alter its regulations on team owners and casino gambling in a manner that could affect the Ilitch family. Different members of the family control the Detroit Tigers and a casino.

Martinez is a Red Sox special assistant and an analyst for TBS. Mendoza is a New York Mets baseball operations adviser and an ESPN broadcaster.

Both criticized Fiers for revealing the Astros’ sign-stealing scam to The Athletic.

“I’m a transparency guy,” Manfred said Thursday. “That someone should be kind of singled out because they saw something that was wrong and decided to talk about it, I don’t agree with that.”

Manfred concluded Martinez’s and Mendoza’s comments were made in their roles as journalists.

“I’m not all that comfortable with it. I’m really not,” he said of their dual roles. “It’s a topic that remains under discussion internally. It caused a lot of complications, not just on this particular incident or comments, but in general.”