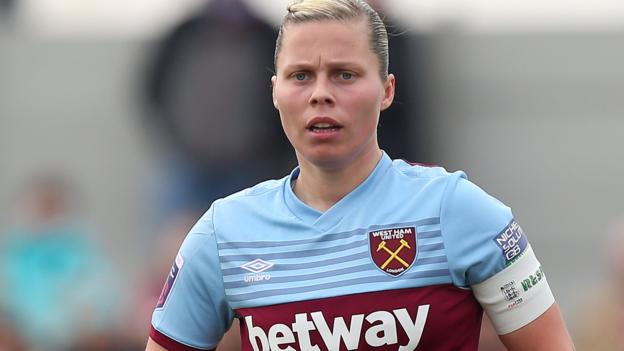 The following story describes scenes which some readers may find distressing.

West Ham United Women captain Gilly Flaherty has urged anybody struggling with their mental health to talk about it, after publicly revealing for the first time her attempt to take her own life 11 years ago.

Speaking to Football Focus, the 28-year-old described how she took an overdose of painkilling tablets and just wanted to go to sleep after feeling as though she could not reveal her sexuality to her parents or cope with the demands on her life at the time.

Flaherty, who captained the Hammers to their first Women’s FA Cup final last season at Wembley, is supporting the Time To Talk campaign.

This weekend also marks the start of the Football Association’s Heads Up campaign, which aims to normalise conversations about mental health.

“I’ve got a responsibility and duty to tell people,” she told BBC Sport. “It’s about getting people to talk. It’s OK to talk about it.”

Recalling trying to take her own life as a 17-year-old, while an Arsenal and England youth player, she said: “It was so sad, when I think about it now, because I should have spoken to my mum and dad.

“I made the decision that day that I was taking an overdose, at 17.

“There were a range of things that I was dealing with and, to be completely honest, I didn’t deal with them.

“I was living away from home. I wasn’t close to my family at all. I was away with England a lot in the younger age groups.

“I wasn’t doing too well at all in college, and I was also obviously dealing with the fact that I knew deep down that I was gay, and I didn’t know how to handle that.

“I was picked on for my weight – I remember being 16 and a coach telling me that I was fat, and little things like that.

“I just couldn’t cope. I didn’t know how to handle it.”

After being found in her room by her best friend, Flaherty was rushed to hospital.

“My mum and dad came into hospital crying, and I just felt like I had let everyone down,” she recalled.

“Four or five months later I came out to my mum and dad as gay.

“Now, I would never, ever, ever consider it ever again. It never comes in my mind. I’ve been through a lot harder times than back then, and I would never ever see that as an answer.

“I’ve always been outgoing but I’ve always had another side of me, in that I’m probably my biggest critic. I’m so tough and harsh on myself all the time, and that stemmed from a very young age.”

While being treated in hospital, Flaherty was visited by her then Arsenal team-mates Ciara Grant and Jayne Ludlow, who is now Wales’ national team manager.

Flaherty said: “Jayne Ludlow and Ciara Grant were like our on-call academy duty officers. I remember me saying to [Ludlow]: ‘Luds, please don’t ring my mum and dad, don’t tell them, I don’t want them to know.’

“Luds said: ‘Gilly, how can I not tell them that you’ve done this?’

“The people that cared about me didn’t know how I was feeling. That was why I had to come out to my mum and dad and my family and say, ‘listen, this is who I am, I am gay, I am seeing someone’.

“I was lying about it, going around and not telling my mum and that’s the thing I couldn’t cope with – lying.”

She joined West Ham United in 2018 and the club says it is committed to ensuring players and staff receive all the support they need, including giving all staff mandatory mental health awareness training, launching an Employee Assistance Programme and training 10 members of staff to be mental health first aiders.

The centre-back, who describes football as her “release”, says what happened has never been discussed with her team-mates.

“I think they’ll be shocked,” she added. “They probably won’t expect it from me of all people because I’m bubbly, I’m outgoing, I’m always smiling and always happy.

“I’ll probably be the last person they expect it from and this is why I felt like I had to say it, because it’s the people you least expect it from – it doesn’t mean they haven’t gone through tough times.

“It doesn’t mean they can’t share a journey with you and help someone. That’s the reason why I’m talking about it.

“We need to talk about it, and we need to let people know, even if someone has got everything going on in their life, it doesn’t mean they’re not going through tough times.

“I went through tough times so if I can get my head out of that and save myself then anyone can. If you are struggling, I want you to reach out. Reach out to someone.”