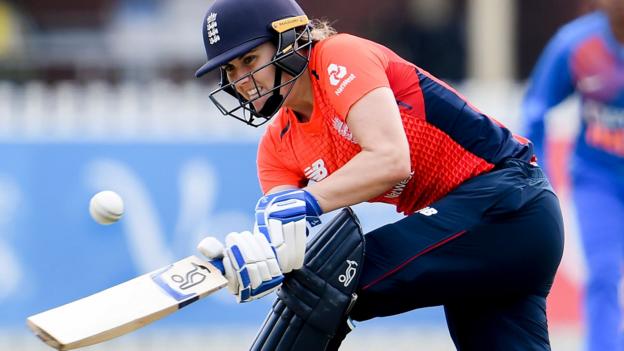 Natalie Sciver led England to a four-wicket win over India in their third match of the T20 tri-series.

Sciver’s composed 50 from 38 balls rescued England after they slipped to 28-3, chasing 124 for victory at the Junction Oval in Melbourne.

India had earlier posted an underwhelming 123-6 from their 20 overs, with pace bowlers Anya Shrubsole taking 3-31 and Katherine Brunt 2-23.

England lost their opening match against India before beating Australia in a super over on Saturday.

They face Australia again on Sunday (00:40 GMT) before the final takes place on 12 February.

India started well, with Smriti Mandhana in particular looking strong down the ground, but she was the only batter to find any fluency on a slow pitch.

Mandhana made 45 from 40 balls, hitting seven fours and India’s sole six of the innings, but after she was stumped off Brunt, India faltered.

They hit just four boundaries in the final 10 overs, with the batters struggling for rhythm as England took pace off the ball.

It seemed a simple chase for England but once again their openers faltered, with Amy Jones falling to the sixth ball of the innings as she offered a simple catch to mid-on.

With the Women’s T20 World Cup just 14 days away, England experimented with their line-up, sending all-rounder Brunt to bat at three, but she and Danni Wyatt were unable to hit out.

When they both fell, England were in trouble, but Sciver played a smart innings, working singles and rotating the strike before hitting out in the final overs.

She brought up her half-century in fine style, striking left-arm spinner Rajeshwari Gayakwad for six, but she was left frustrated after chipping her next delivery back to the bowler.

Tammy Beaumont was run out with only three runs needed for victory but Lauren Winfield hit her second ball through the hands of India captain Harmanpreet Kaur to wrap up victory.

While England will be pleased to avenge their loss to India, they may be frustrated that they were not able to make a more convincing go of the chase.

But should India lose to Australia on Saturday morning (01:10 GMT), it will guarantee an Australia-England final, whatever happens when they meet on Sunday (00:40 GMT).

‘Bit of a non-event’ – what they said

England captain Heather Knight: “It was a bit of a non-event as a game, the pitch was a little bit slow so we had to change our plans and to keep them to 123 was really pleasing.

“We all know how good Nat is with the bat, she did the job and it was just a case of getting over the line.”

Player of the match Anya Shrubsole: “It wasn’t one of the prettiest games of cricket we’ll ever see, but it’s another win in the bank and hopefully we can take the momentum on.

“The pitch was a little bit slow, a lot of our seamers bowled with the pace off and into the wicket, so some good lessons going into the next game.”

India captain Harmanpreet Kaur: “We were not able to give our best. The spinners are doing really well, but for them to do well we need to put decent totals on the board. We have to win tomorrow’s game.”