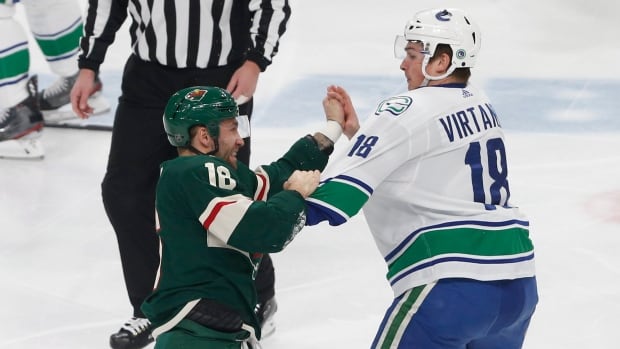 Kevin Fiala and Brad Hunt each had a goal and an assist as part of Minnesota’s three-goal first period and the Wild beat the Vancouver Canucks 4-2 on Thursday night.

Ryan Hartman and Zach Parise also scored for Minnesota. Alex Stalock stopped 24 shots to establish a career high with his 13th win of the season.

“It’s so much easier to play than chasing the game all the time,” Wild coach Bruce Boudreau said. “We knew their goal differential in the first period was their best. We knew they always come out hard and I think we were ready for it.”

J.T. Miller and Antoine Roussel scored and Jacob Markstrom made 33 saves for Vancouver, which has played 10 of its last 13 games on the road and finished a five-game trip 2-2-1 after winning the first two games.

“I thought we did some good things on this road trip that we can take back home with us,” Canucks captain Bo Horvat said. “At the same time, we got to figure out a way to get wins here.”

They hope to have Elias Pettersson back. The top-line centre, who has 23 goals and 55 points, was a late scratch with a lower-body injury that occurred on a late hit Tuesday in Boston.

Minnesota, which began the day six points out of a playoff spot, finished 5-2 on its season-high, seven-game homestand, yet remains at the bottom of the Central Division.

On Tuesday, the Wild gave up two third-period goals to Chicago before winning in overtime.

“I just liked that when we put the puck in the zone, we had guys chasing it,” Wild forward Marcus Foligno said. “Last game we played, we had pucks going into the zone and then we were just kind of playing defence and letting them come at us.”

Parise scored his team-leading 20th goal in the third period to make it 4-1. It’s the fifth time Parise has hit that mark with Minnesota, tying Marian Gaborik for most in team history.

Hunt gave the Wild an early 1-0 lead before a miscue by Markstrom led to a 2-0 advantage midway through the first.

The Vancouver goalie blindly passed a puck behind his net where it was intercepted by Mikko Koivu. The Wild captain sent a quick pass to Hartman for an easy backhand goal.

“It’s hard enough to win in this league,” Markstrom said, “and when you give a bad turnover there by me and 2-nothing and then 3-nothing before the period ends, it’s tough.”

Fiala scored the final first-period goal, and has three goals in two games after scoring once in his previous 17.

“I’ve never seen him not to be confident,” Boudreau said. “So, I just think he’s getting it. He’s working hard and if he continues to do this, he becomes a way more important part of our team.”

Miller scored on the power play midway through the second to get Vancouver within 3-1. Quinn Hughes had an assist to reach the 40-point mark in his rookie season.

Roussel scored on a late power play. The Canucks went 2 for 4 with the man-advantage and are 3 for 17 in six games since the All-Star break, and 6 for 48 over the last 14 games.