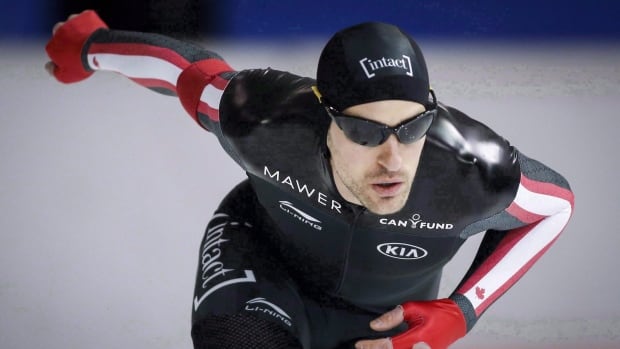 Denny Morrison leaves speedskating a king of comebacks and the beneficiary of a teammate’s generosity.

Winner of Olympic gold and silver medals in team pursuit and a silver and a bronze in individual distances, the 34-year-old from Fort St. John, B.C., is retiring and will be honoured Saturday during a World Cup in Calgary.

Earning a silver medal in 2014 when teammate Gilmore Junio gave up his spot in the 1,000 metres to Morrison was a Canadian feel-good story of those Winter Olympics.

Also defining Morrison’s career was the physical and mental resilience to race again after a devastating motorcycle crash in 2015, followed by a stroke less than a year later.

“My story is integrally tied in with Gilmore’s,” Morrison told The Canadian Press. “That’s his story of generosity and doing the best thing for the team and I was the beneficiary of that.

“I hope that my legacy is that grit factor.”

Racing in his fourth Winter Games in 2018 seemed improbable given the litany of injuries Morrison suffered when a left-turning car slammed into his motorcycle at a Calgary intersection in May, 2015.

Along with a broken right leg, Morrison sustained a concussion, a punctured lung, a torn anterior cruciate ligament in his knee, bruised liver and kidneys and a small fracture in a bone near his spine.

A stroke less than a year later while biking with his wife Josie in the United States was another setback.

Canadian speedskater Denny Morrison in in Pyeongchang to compete after having two near-death experiences in the three years since winning two medals in Sochi. 9:39

But Morrison qualified to race in Pyeongchang, South Korea. He finished 13th in the 1,500 metres after earning bronze in that distance four years earlier.

Morrison leaves the sport tied with Gaetan Boucher for the most Olympic medals earned by a Canadian man in long-track speedskating.

“He sometimes would have this switch and would just be relentless. Even though he wasn’t up to it, he would still do the workouts and he would still get it done.”

Morrison was driven by the feeling that if he didn’t bring his best to the oval, he was letting down his teammates in training.

“The saying is ‘we are what we repeatedly do. Excellence therefore is not an act, but a habit,”‘ Morrison recited.

“If I was tired, I said ‘I came here to train today and this is what I’m doing.”‘

Morrison helped Canada win team pursuit silver when the event made its Olympic debut in 2006.

Three gold was his goal in Vancouver four years later, but he underperformed in his individual distances.

Morrison says that set him on a path for the 2014 narrative with Junio.

“Failing in two individual events, my coach and my teammates picked me back up and said ‘OK, we can do this. We have another shot at a gold medal at the Olympics here in Canada on home soil,’ he recalled.

“That forced me to realize this is a team sport. If I want to achieve something individually for myself, I need to become a better teammate. After 2010 is when Gil and I started training together.

“The story culminates in 2014, but I think if I wouldn’t have had the failure that I had in Vancouver, I might have never had the teamwork and building that relationship with Gilmore over those four years of training together.”

Morrison broke his leg cross-country skiing less than 13 months out from the 2014 Winter Games in Sochi, Russia. He fell in the 1,000 metres at Canadian trials with Junio claiming a spot.

JUST IN <br><br>Canadian Speed Skater <a href=”https://twitter.com/Denny_Morrison?ref_src=twsrc%5Etfw”>@Denny_Morrison</a> announces retirement. <br><br>The 33-year-old product of Fort St. John, B.C. won four Olympic medals for Canada and inspired us all through his resilience and courage. <br><br>It’s been a pleasure getting to share some of your story, Denny. <a href=”https://t.co/xYZvknlJLg”>pic.twitter.com/xYZvknlJLg</a>

Speed Skating Canada asked Junio in Sochi if he would vacate his berth in the race for Morrison, which Junio did.

“I think it’s something Denny and I have lived a lot and told the story a lot,” Junio said. “Any time someone brings it up, it’s still really cool to see how it really affected a lot of people in the country.

“People kind of got behind the story.”

Junio raced the 500 metres in both Sochi and Pyeongchang and continues to compete for Canada.

Despite a knee surgery after the 2018 Olympics — a holdover from the motorcycle accident — Morrison contemplated another return to racing.

He wants to apply to medical school, however, with the goal of working with athletes in the future.

“It took me that time to shift my goal from speedskating and achieving everything I can in speedskating and break what was a habit in some ways of never wanting to give up and not wanting to quit until I was bumped off the team, to realizing I have other goals in life and in school,” he said.