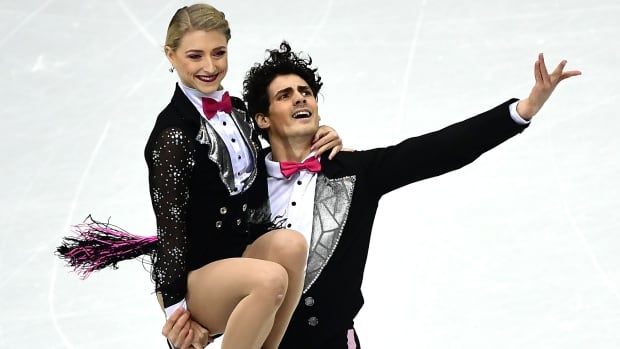 Madison Chock and Evan Bates of the U.S. successfully defended their title with 213.18 points followed by the Canadian champions at 210.18, a personal best international score. Madison Hubbell and Zachary Donohue of the U.S., first after the rhythm dance, took the bronze at 208.72.

Dancing to “Both Sides Now” by Joni Mitchell, Gilles and Poirier, from Toronto, produced level-four twizzles, lifts and combination spin on route to their third Four Continents medal of their career. They were third after the rhythm dance.

“We’re both really proud of ourselves,” said Poirier. ”This was a really quick turnaround after nationals [last month] so to have higher scores at this event compared to the Grand Prix [in the fall] is really satisfying. We are really pleased with our consistency this season.

“It’s a great set up for the world championships.”

“Every competition we keep improving,” said Lagha. “We are learning to deal with all the aspects of competing at the senior level.”

Messing in the hunt in men’s competition

In men’s competition, Keegan Messing of Sherwood Park, Alta., is also in the medal hunt standing fourth after the short program with 94.03 points. Two-time Olympic champion Yuzuru Hanyu of Japan leads with 111.82, Boyang Jin of China is second at 95.83 and Jason Brown of the U.S. third at 94.71.

“To go out and skate a clean program just fills me up with the same butterflies as watching my wife walking down the aisle,” said Messing, who skated to Ed Sheeran’s “Perfect”. “It’s one of the few times I don’t feel like I’m skating alone on the ice. It fills me with such warmth to skate it.”

Nam Nguyen of Toronto is ninth and Roman Sadovsky of Vaughan, Ont., 17th.

Competition continues through to Sunday.