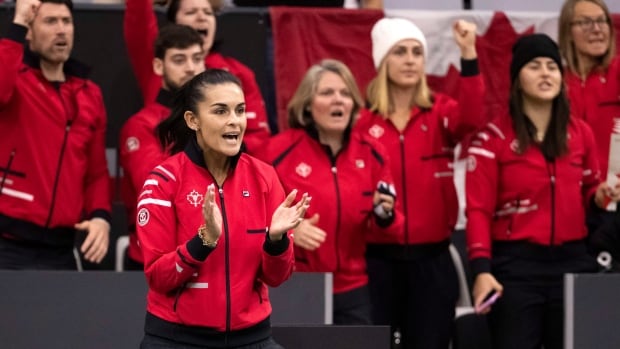 Switzerland won the first two rubbers Friday in its best-of-five Fed Cup qualifier against Canada at the Swiss Tennis Arena.

Jil Teichmann opened with a 7-6 (4), 6-4 win over Leylah Annie Fernandez of Laval, Que., on the indoor hardcourt. Fifth-ranked Belinda Bencic followed with a 6-1, 6-2 win over Ottawa’s Gabriela Dabrowski 6-1, 6-2 in the other singles match.

“She’s a great player and I (made) some great shots too, I just missed a few important ones in the first and second set and that cost me the match,” said Fernandez, who’s ranked 185th in the world.

Dabrowski, a doubles specialist, filled in for Eugenie Bouchard of Westmount, Que., who sat out with a left wrist injury.

Reverse singles and the doubles match were set for Saturday. Fernandez will take on Bencic while Dabrowski, ranked seventh in doubles but 448th in singles, will meet the 68th-ranked Teichmann.

Reigning U.S. Open champion Bianca Andreescu, the world No. 6 from Mississauga, Ont., was not selected for singles play due to a lingering knee injury. She hasn’t played a competitive match since suffering a left knee injury at the WTA Finals over three months ago.

Andreescu was still tabbed to play doubles with Dabrowski. If needed, teams can substitute players up to an hour before the match.

The Canada-Switzerland winner advances to the inaugural Fed Cup Finals in Budapest in April.

The losing team will fall into a playoff tie in April against a Regional Group I nation for a chance to reach the 2021 qualifiers.

'It's going to be nasty': The party of Trump won't soon forget Romney's desertion