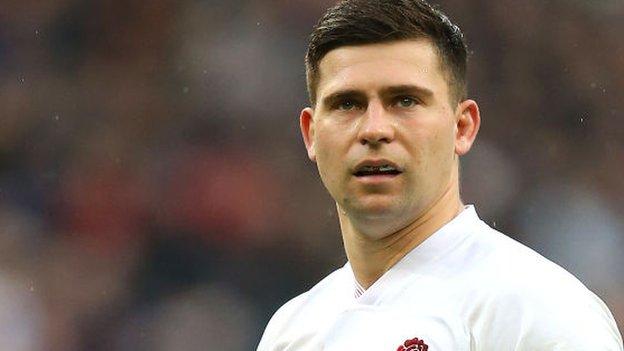 Scrum-half Ben Youngs is among the senior players left out as England make five changes to their starting XV to face Scotland.

Willi Heinz replaces Youngs at nine, with flanker Lewis Ludlam in for Courtney Lawes in the wake of defeat by France on the opening weekend.

Saracens’ Ben Earl is set for a debut as one of six forwards on the bench.

Bath hooker Tom Dunn could also win his first cap as he joins Lawes and Joe Launchbury, who has recovered from a knee injury, among the replacements.

Dunn was recalled to the squad when Luke Cowan-Dickie left the team’s training camp on Thursday morning after his wife went into labour.

Joe Marler, who started the defeat by France, is left out of the matchday squad entirely with Ellis Genge as loose-head back-up and Will Stuart covering the other side of the scrum.

“It is just a reversal of roles,” head coach Eddie Jones told BBC Radio 5 Live when asked about the change at nine.

“We feel, depending on conditions, that the game breaks up and there is more space for his Ben’s running skills which we want to get back into his game.

“Willi tends to play with a fair bit of control, has a good kicking game and has a calming influence on the people around him.”

Jones also repeated his claim that Scotland indulge in deliberate gamesmanship to try and put off their opponents.

Before England’s last game at Murrayfield in 2018, Owen Farrell clashed with Scotland forward Ryan Wilson in the tunnel as the teams returned from their warm-ups.

Jones also claimed that during his time in charge of Australia between 2001 and 2005 Scotland re-marked the pitch on the evening before a Test match to restrict the width the tourists could play with.

“This is a consistent sort of behaviour that we see from Scotland so we just have to be prepared for anything,” he said.

“We know they are going to come at us, try and distract us and put us off our games and they were able to do that in the tunnel two years ago. There could be more of the same this year or it could be something else.”

England have won on just three of their last seven trips to Murrayfield, losing 25-13 on their most recent visit in 2018.

Historically, they have won just 42% of away matches against Scotland in a rivalry that stretches back to 1871. By contrast England have won 67% of their home matches against their neighbours.

Youngs, 30, is the most experienced player in England’s Six Nations squad with 96 caps to his name, but was out-shone by opposite number Antoine Dupont in Paris.

Gloucester’s Heinz, 33, will be making only his fourth start for England. Head coach Jones opted to take just those two scrum-halves to the Rugby World Cup last year, overlooking the likes of Saracens duo Ben Spencer and Richard Wigglesworth or Harlequins’ Danny Care as cover.

Northampton’s Alex Mitchell, 22, was included in his latest wider squad as an apprentice, however, after making his way back from a knee injury.

The conditions on Saturday are set to favour an attritional, rather than ambitious, gameplan, with Storm Ciara forecast to bring winds of more than 40mph to the Scottish capital.