Montrealers stranded in Wuhan will come home as a family 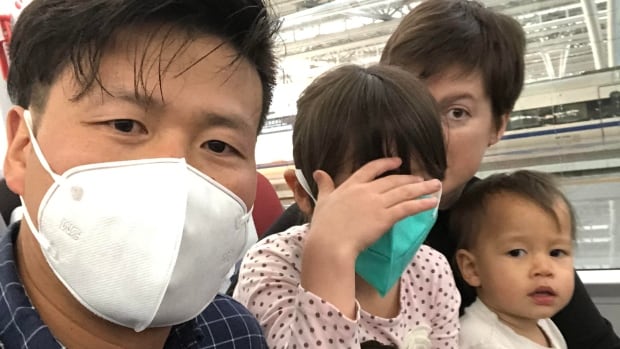 After weeks of uncertainty, Montrealers Megan Millward, Lie Zhang and their two young children will come home on the first government flight repatriating Canadians from the region of China that is at the centre of the coronavirus outbreak.

It was all thanks to a mistake, the couple says, that led them to drive into the wrong parking lot and enter the wrong door of the airport in Wuhan, which allowed Zhang to join the family for screening.

“It was just a fluke. They said, ‘Oh, you’re in the wrong place, but we’ll get you to the right place,” Millward said in an interview with CBC News Network as the family waited to board the flight.

Because Zhang is a permanent resident of Canada and not a citizen, the government had not included him on the flight manifest.

The federal government had initially said it would only allow citizens on the flight, which led to confusion over who would accompany children who are citizens but whose parents are permanent residents.

Officials then said they would allow permanent residents to travel with otherwise unaccompanied minors.

Still, that did not get Zhang on the list because Millward is a citizen. For days, the family struggled to find out if there would be a way to guarantee him a spot on the flight.

The family had access to a car and Zhang has a Chinese driver’s license and so was able to act as their driver in getting through the multiple checkpoints set up on roads in the region as a result of the quarantine.

Once they had access to Canadian officials at the airport, Zhang and Millward explained their situation.

Watch Zhang and Millward speak from the Wuhan airport:

Montrealers Megan Millward, Lie Zhang and their two young children are coming home thanks to persistence and a little luck. 4:09

“I thought there might be a chance that I would be able to get on the plane,” Zhang said. “So, I waited and waited and we told them our situation, that our kids are so young and we really hope that we can stay together.”

Zhang and Millward’s children are two and six years old. The family had travelled to the countryside outside Wuhan in January to visit Zhang’s relatives for the Lunar New Year, before the city was put under quarantine.

“Finally, they confirmed, ‘Yes, you are able to go,’ so that was great, great news,” he said.

“We’re very happy, very relieved that we’ll be able to get back on Canadian soil.”