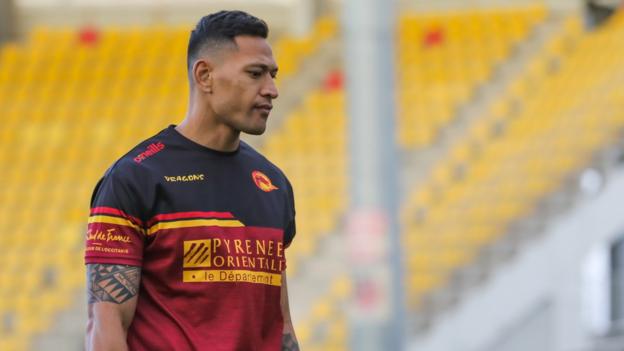 The 30-year-old, who was sacked by Rugby Australia after a homophobic social media post, was registered despite opposition from fellow clubs.

Super League said it lacked the powers to reject the bid in the way the Australian National Rugby League had.

“I think it was a sad day for Super League,” Elstone said.

Speaking on the Super League’s in-house ‘Inside Super League’ show, he continued: “It was a different week for Super League, and a difficult week for me personally – I had a few sleepless nights on it. I think we came to the wrong conclusion.”

At a board meeting on Wednesday, Super League voted unanimously to have “greater authority” to stop future “controversial signings” such as Folau.

There is a chance Folau could make his debut for Catalans at Wakefield on Sunday, despite not having played any code of rugby in the past 10 months.

The departure of Brayden Wiliame to St George Illawarra a year early, coupled with injuries to Tom Davies and Lewis Tierney, has left the Dragons short of numbers in the outside backs.

Trinity head coach Chris Chester admitted his “hands were tied” regarding any comment on Folau, but reiterated support for the statements made by the competition and by chief executive Michael Carter.

“I’ve been strictly told by the people above and by Super League not to make any comment on anything to do with the gentleman from Catalans and I won’t be making any comment on it,” Chester said.

“My hands are tied at this moment in time. Whether that changes over the coming weeks, I don’t know, but I’m under strict guidelines here from my chairman and my CEO and also from Super League.

Wakefield have confirmed their next two home games against Catalans and Warrington will be celebrations of inclusivity, featuring their Physical Disability, Learning Disability, reserves and women’s teams.

Folau’s sacking in April 2019 by the Australian rugby union was triggered by a post which read “hell awaits” gay people, although he later reached a settlement with the governing body.

He has started training with Catalans but, having not played either code of rugby for 10 months after the NRL ruled out his return to Australia’s top-flight competition, it is currently unclear when he will make his Super League debut.

‘Unanimous in their distaste’

Meanwhile, member clubs, with Hull Kingston Rovers at the forefront, have also threatened legal action should the signing have a detrimental impact on sponsorship and income streams.

“Keegan Hirst’s comments really nailed it about a sport that’s always had the courage to find the right answers and make the right decisions,” Elstone added. “I’m not sure, personally, we did that.

“Probably not a unanimous view, I think people were unanimous in their distaste of what Folau had said – what him or his religion is telling him is right – but there wasn’t unanimity on the outcome.

“For me personally, someone who has stood up all my life and talked about what this sport stands for – a very sound sport, with sound people, with contemporary values – I think we took a bit of a hit on that.

“I had an approach from the Dragons saying: ‘We’d like to register Folau, what are your views?’ My initial reaction was negative, however, I did commit to thinking about it, sleeping on it, dwelling on it and also consulting others within the game.

“I think four or five days of consultation, talking to commercial partners, talking to people close to the game – advisers, colleagues, stakeholders – the conclusion I came to was this was not right for Super League and I made those views clear to the Dragons, made those views clear to the RFL, but the Dragons had clearly come to their own conclusion on that, and I think that’s one of the issues the game needs to look at going forward.”

In different circumstances, the signing of a player such as Folau would be heralded in the same way that Sonny Bill Williams’ arrival at Toronto was – a major-name attraction for the Super League.

He is a former State of Origin player with Queensland, an Australia international and a Grand Finalist in the NRL while with Melbourne Storm, scoring 84 tries in 105 games in the southern hemisphere.

However, unlike Williams, Folau’s availability and decision to move to the competition is directly linked to the actions which have caused such widespread condemnation of the decision. Super League was increasingly his only option.