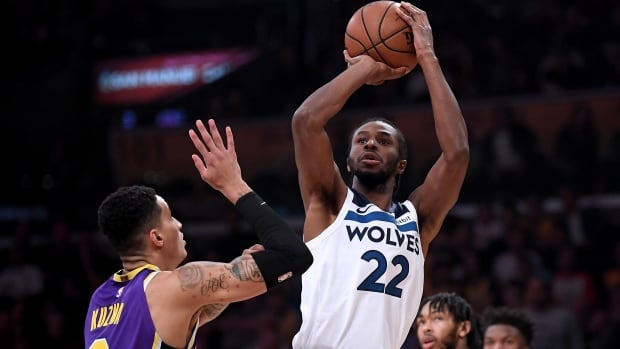 In a swap of high scorers, the Minnesota Timberwolves acquired D’Angelo Russell on Thursday from the Golden State Warriors for Andrew Wiggins.

Russell had been on Minnesota’s radar for months, a dynamic point guard in his fifth season in the league after going as the second overall pick in the 2015 draft.

The first choice that year was Timberwolves centre Karl-Anthony Towns, a friend of Russell around whom the front office has been trying to rebuild the roster. Minnesota will be Russell’s fourth NBA team. He averaged 23.6 points per game for the injury-wrecked Warriors, a career high after coming in an off-season trade with Brooklyn.

The Wolves tried to woo him then, too, but Russell instead steered that sign-and-trade swap toward the Warriors, the five-time defending Western Conference champions who’ve won three NBA titles during that span. The 6-foot-4 Russell is playing the first season of a four-year, $117 million US contract.

Wiggins, the first overall selection in the 2014 draft, never fulfilled his potential with the Wolves, a shooting and slashing wing with the athleticism and frame to dominate on the perimeter. He is averaging 22.4 points this season, an uptick from the past two years but still capped by a pattern of inconsistency. He’s been a defensive liability, too, for a team that has persistently ranked among the easiest to score against in the league. The 6-foot-7 Wiggins is in the second season of a five-year, $147 million deal.

The Timberwolves, who have lost 12 straight games, have bottomed out in their first year under president of basketball operations Gersson Rosas as he attempts to remake the roster for a faster-paced, three-point-heavy offence as directed by rookie coach Ryan Saunders.

The deal continues to evolve, according to the report, and could include more players and/or draft picks.

Morris, 30, has averaged a career-best 19.6 points in his ninth NBA season and first with the Knicks. He has averaged 12.1 points and 4.7 rebounds over a 588-game career with the Houston Rockets, Phoenix Suns, Boston Celtics, Detroit Pistons and Knicks.

The Clippers, Knicks and Wizards have agreed to a three-team trade that will land Marcus Morris and Isaiah Thomas with the Clippers, league sources tell ESPN. Jerome Robinson will join the Wizards, Moe Harkless and a 2020 first-round pick to the Knicks.

Harkless has been a solid role player in his first season with the Clippers, scoring 5.5 points with 4.0 rebounds while playing in 50 games, 38 of them starts. In eight seasons with the Orlando Magic, Portland Trail Blazers and Clippers, Harkless has scored 7.2 points per game with 3.7 rebounds.

The Clippers had opened a roster spot earlier Thursday by trading guard Derrick Walton to the Atlanta Hawks.

A person familiar with the negotiations says centre Dewayne Dedmon is returning to the Atlanta Hawks in a trade that sends centre Alex Len and forward Jabari Parker to the Sacramento Kings. The Kings also are giving the Hawks two second-round picks.

The person spoke to The Associated Press on condition of anonymity because the trade has not been announced by the teams. The deal comes hours before the NBA trade deadline.

Dedmon is returning to Atlanta, where he enjoyed his two most productive seasons, from 2017-19. The trade also satisfies his wish to leave Sacramento. Dedmon was fined $50,000 on Jan. 2 for making public his desire to be traded by the Kings.

“I haven’t been playing, so I would like to go somewhere where my talents are appreciated,” Dedmon told the Sacramento Bee.

Dedmon has averaged 5.1 points and 4.9 rebounds while starting in only 10 games for the Kings this season. He averaged a career-best 10.8 points with 7.5 rebounds for Atlanta in the 2018-19 season.

According to the NBA’s labor agreement, players may not make public demands for a trade. The 30-year-old Dedmon signed a three-year, $40 million deal with the Kings in the off-season.

The Hawks have used the NBA trade deadline to address their deficiency at centre. Atlanta on Wednesday acquired center Clint Capela from Houston as part of a 12-player, four-team trade. Capela is seen as a foundation player for Atlanta, along with guards Trae Young and Kevin Huerter and forward John Collins.

Cavs to acquire Drummond from Pistons

The Cleveland Cavaliers have agree to acquire centre Andre Drummond in a trade from the Detroit Pistons, a person familiar with the deal told The Associated Press.

The sides agreed to the package shortly before the NBA’s 3 p.m. deadline, said the person who spoke on condition of anonymity because the teams were still working out some details.

Cleveland, which is just 13-39 this season, is sending forward John Henson, guard Brandon Knight and one of its two second-round picks in 2023 to the Pistons, the person said.

If there’s one thing I learned about the NBA, there’s no friends or loyalty. I’ve given my heart and soul to the Pistons , and to be have this happen with no heads up makes me realize even more that this is just a business! I love you Detroit…

The Cavs need some help. They have the worst record in the Eastern Conference and have been struggling in their rebuild under first-year coach John Beilein. Cleveland has dropped 12 of 13.

One of the conference’s best all-around big men, Drummond is averaging 17.8 points and 15.8 rebounds in his eighth season with Detroit.

Drummond’s arrival will make the Cavs immediately better, and it may allow them to make more moves, perhaps with forward Kevin Love or centre Tristan Thompson, who is eligible for free agency this summer.