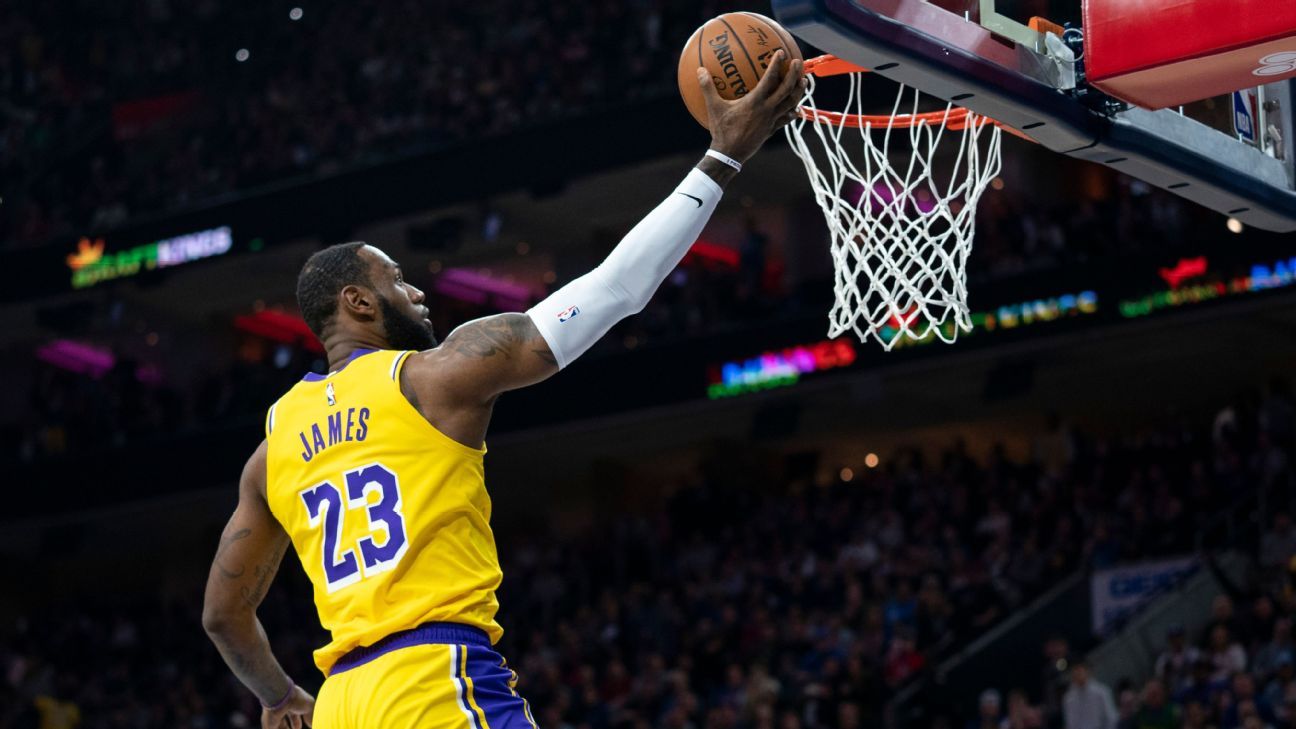 PHILADELPHIA — Years ago, it was LeBron James following Kobe Bryant by coming straight out of high school to the NBA, and Saturday, it was James passing Bryant for the No. 3 spot on the NBA’s all-time scoring list.

James entered the Lakers’ game against the 76ers on Saturday, needing 18 points to eclipse Bryant’s career total of 33,643 points. And though it was a grind, as Los Angeles struggled to create offense most of the night, he set the record with a running layup in the third quarter during the team’s lone trip this season to the city in which Bryant was born, a 108-91 loss at the Wells Fargo Center.

Philadelphia was prepared for the pomp and circumstance, with a sold-out crowd in attendance — and a national, prime-time television audience — to witness history as two star-laden teams from opposing conferences battled in late January. During the timeout after the layup, James was saluted with a standing ovation.

History or otherwise, the Sixers were motivated to defend not only James, but the entire Lakers’ arsenal. Philadelphia never relinquished the lead in the second half, as Ben Simmons and Tobias Harris combined for 57 points and 18 rebounds in the win. James and Los Angeles built up some momentum in the fourth quarter, but the Sixers eventually pulled away for good.

James finished with 29 points, eight assists and seven rebounds, and he gave the Philadelphia faithful one more lasting memory from the historical night with a breakaway, tomahawk slam dunk off a feed from Kentavious Caldwell-Pope at the 6:57 mark that forced a 76ers timeout. But he also had eight turnovers in the loss.

James inscribed his sneakers with “Mamba 4 Life” and “8/24 KB” in gold marker before the game, showing respect for the former Lakers great. It didn’t stop there. All week, in the lead-up to the milestone, he was quick to laud Bryant.

“It’s another guy that I looked up to when I was in grade school and high school,” James said. “Seeing him come straight out of high school, he is someone that I used as inspiration. It was like, wow. Seeing a kid, 17 years old, come into the NBA and trying to make an impact on a franchise, I used it as motivation. He helped me before he even knew of me because of what he was able to do. So, just to be able to, at this point of my career, to share the same jersey that he wore, be with this historical franchise and just represent the purple and gold, it’s very humbling and it’s dope.

“Kobe’s a legend, that’s for damn sure.”

James said the feat is meaningful to him because of the elite basketball company it allows him to be mentioned among, but he doesn’t take any further satisfaction being saluted specifically for his scoring.

“To be linked with the greats, that means a lot to me,” James said Thursday. “Because I grew up idolizing Michael [Jordan] and idolizing Kobe, idolizing these guys, gaining inspiration from their craft, gaining inspiration from their stories, being a kid that I am from Akron, Ohio. So, that’s huge. Anytime I’m linked with the greats or I’m able to do something in my career where I’m mentioned with any of the greats, it’s a pretty cool thing.

“But as far as looking at the scoring, I don’t know. That doesn’t mean much to me. Just the overall point in my game is what means more to me. Me being an overall, all-around player. Being able to be successful on the floor and being able to contribute to the franchises that I’ve played for — the three franchises that I’ve played for so far in my career.”

James was asked if he incorporated any aspects of Bryant’s game into his own.

“No,” he said. “I can’t sit here and say that I did. Because we were just two totally different players. His willingness to do whatever it takes to win is something that you admired and love his drive to get better and better every year, but as far as his game, we’re different players. I’m more of a facilitator. He’s a natural-born scorer. So, we would have worked well together as you saw on the Olympic team.”

James and Bryant teamed together for gold medals for Team USA in Beijing in 2008 and London in 2012.

It’s a purple-and-gold affair at the top of the scoring list. All of the top four scorers in NBA history donned a Lakers uniform at some point in their careers. The only players left with more career points than James are Kareem Abdul-Jabbar (38,387 points) at No. 1 and Karl Malone (36,928 points) at No. 2.

James has said in the past he didn’t hold up his end of the bargain by lifting the Cleveland Cavaliers to the NBA Finals when Bryant was making his seemingly annual parade to the championship round with Pau Gasol.

While the Finals showdown never happened, the pair did face off 22 times in the regular season from 2004 to 2016 and James’ teams owned the matchup, going 16-6, including wins in 10 of the final 11 times they played each other.

“When LeBron came to Los Angeles, he is now a Laker, he is part of our brotherhood, part of our fraternity, and we should embrace him that way,” Bryant told the Los Angeles Times when asked about James nearing his scoring mark. “You got to celebrate … [and] appreciate what he is as an athlete while he is here.

The path to history: How LeBron passed Kobe in all-time scoring