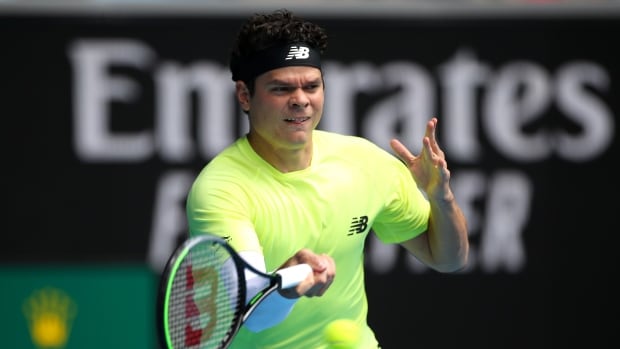 Milos Raonic is into the Australian Open men’s singles quarter-finals for the fifth time in the last six years.

The 29-year-old Canadian backed up a straight-sets upset of No. 6 seed Stefanos Tsitsipas with a 6-4, 6-3, 7-5 win over a Croatia’s Marin Cilic in the fourth round on Saturday.

Although the 2014 US Open champion Cilic, who is part of Raonic’s generation of players and has also gone through a tough 12 months, was hampered by a lower back issue early on, there wasn’t a lot he could do as Raonic put on another serving clinic.

The Canadian fired 35 aces, bring his total through four matches to 82.

“It was a roller coaster. He was playing better than I was through most of the first set. I was lucky to get through that, made a bit of a run with it,” Raonic said during a post-match interview on court. “I’m just happy to be out here, to be feeling well and to be playing good.

“I haven’t gotten to do this that much over the last few years, so it means a lot to me.”

Through four rounds, Raonic has yet to drop a set. And only one of the 12 sets he has played has gone as far as a tiebreak.

He will face the winner between defending champion Novak Djokovic and No. 14 seed Diego Schwartzman.

Memorial benches: 'A quiet reminder of people gone, but not forgotten'