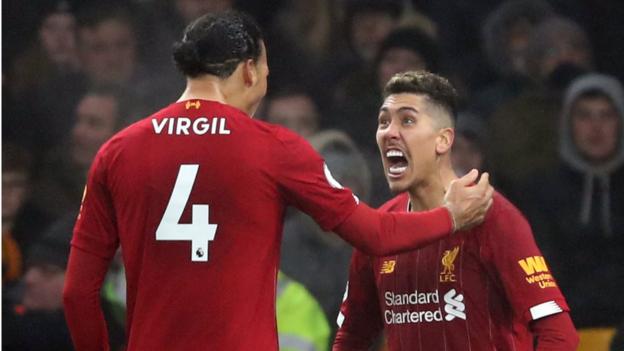 Liverpool’s march to the Premier League title continued as Roberto Firmino’s late winner at Wolverhampton Wanderers gave them the victory that extends their lead at the top to 16 points with a game in hand.

Wolves can consider themselves unfortunate to be the victims of Liverpool’s 22nd win in 23 league games after making life as uncomfortable as anyone has for Jurgen Klopp’s side this season before Firmino ensured Liverpool took another significant step towards their first title in 30 years.

It was the first goal Liverpool – who lost Sadio Mane to a muscle injury in the first half – had conceded in the league for more than 12 hours and it required important saves from goalkeeper Alisson to keep out Traore and Jimenez as Wolves pressed.

Liverpool, as ever, carried a huge threat and Firmino drilled home the winner with six minutes left – although substitute Diogo Jota then wasted a glorious chance to give Wolves a point in stoppage time.

The Reds, who have won their past 14 league games, are the third team to go 40 games unbeaten in the Premier League.

Liverpool were arguably put under more pressure here at a vibrant Molineux than at any time in the Premier League this season – but the champions-elect did what champions do and found a way to get the job done.

After Wolves equalised, and with the dangerous Traore moving through the gears, there was the possibility that Liverpool could lose their first league game in more than a year.

This, however, is a team that has forgotten how to draw never mind lose and even though it came against the run of play, it was no great surprise when Firmino made the decisive late contribution.

And at the heart of it all was captain Henderson, unsung for so long but now in the best form of his career.

Henderson delivered a collector’s item with that header from a corner but it was his more customary attributes that helped his team through periods of suffering in the second half, although he also delivered the crucial pass for Firmino’s winner. He was constantly available and always urging his team-mates to greater efforts.

He has grown in stature, along with Liverpool, in these last two seasons and is now the heartbeat of this outstanding team.

His influence in increasingly recognised and he was the driving force as Liverpool ground out a win in such a difficult environment.

Wolves are here to stay

Wolves manager Nuno Espirito Santo and his players understandably cut dejected figures at the final whistle, denied so late on as they pushed to become only the second team after Manchester United to take points off Liverpool this season.

When that disappointment subsides, they can look back with pride on a performance that produced further evidence of what has been rebuilt at this famous old club.

Wolves were organised, played without fear, and in Jimenez and Traore possess a huge threat to back up their many qualities elsewhere.

Traore’s power and pace gave Andrew Robertson a very uncomfortable night while Jimenez has developed into a striker of the highest class.

It is all played out in Molineux’s atmospheric arena, where the Wolves fans are revelling in what is being produced – and so they should.

Wolves can now regard themselves rightfully as a force in the Premier League. They are entertaining and superbly coached. This is a team that is here to stay in the upper reaches.

Man of the match – Jordan Henderson

Most points after 23 games ever – match stats

Liverpool play three times before Wolves’ next game. The Reds visit Shrewsbury in the FA Cup fourth round on Sunday (17:00 GMT), and go to West Ham next Wednesday (19:45) in their Premier League game in hand.

Klopp’s side then host Southampton on Saturday, 1 February (15:00), with Wolves visiting European rivals Manchester United at 17:30.