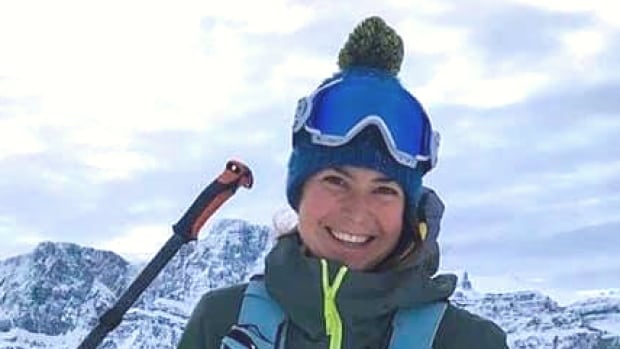 Adam Campbell was standing on a mountainside Friday looking down the slope where his wife had just skied her last run of the day when the snow gave way.

It left a patch of solid snow where he stood, but all around him it slid. The resulting avalanche rushed down the hill and engulfed Dr. Laura Kosakoski, a family doctor who lived in Canmore, Alta.

Kosakoski, 32, was buried in snow in the Mount Hector area of Banff National Park. By the next day, she would be dead.

It took her husband and his friend almost an hour to find her and clear the snow from her face. It took almost that long again to dig out the rest of her body.

“I was fighting hard to try to keep it together,” said Campbell, talking about the tragedy by phone with CBC Calgary.

Campbell and his friend eventually pulled Kosakoski from the snow and wrapped her in jackets. Campbell pulled out one of his spare gloves to replace one that she had lost while buried. They performed CPR and co-ordinated a rescue.

Hope in the hospital

Kosakoski was taken to the nearby Highway 93, where a helicopter shuttled her to Banff and then STARS air ambulance rushed her to Calgary.

Campbell said Kosakoski’s body temperature had plummeted to 24 C — hypothermic — but that doctors were able to gradually bring her temperature back up. Her heart, which had stopped, started to pump.

“And at that point she was taken out of the OR and was put down in ICU, and we were able to go and see her for the first time since the accident and then basically able to sit with her from that evening through until eventually she passed away,” said Campbell.

He said she flatlined once more that night, but they revived her and everything was looking positive. But the next morning doctors discovered her bowel had died — a turn of events “incompatible with life,” the doctors told him.

“And so they just took away the blood transfusions and the rest and just let her body slowly fade away.”

Kosakoski’s mother, on vacation in Colombia at the time of the accident, was able to book a flight to Calgary, but was still in the air when doctors delivered the bad news.

Kosakoski held on. Her heart kept beating as her mother’s plane touched down and her cellphone rang.

“Fortunately she was able to … she answered the call and we were able to put her up on speakerphone to Laura’s ear, and she was able to say goodbye to her daughter before she flatlined,” said Campbell.

“So she was able to say one last thing to her before she left us, which we are all so unbelievably grateful for.”

‘Kos is my best bud’

Kosakoski was a young family doctor in Canmore, a career she had chosen after two years in the prestigious anesthesiology program at the University of Calgary.

Kosakoski, originally from Kamloops, previously studied medicine at the University of British Columbia and had been a member of the College of Physicians and Surgeons of both Alberta and British Columbia.

Campbell said the decision to work in Canmore, a small town with families, rather than as a specialist in the city, was part of who Kosakoski was — caring and courageous.

“That was the thing that was incredibly striking when these people were coming from the various phases of her life, everybody would call her “Kos” — they’d say, Kos is my best bud, Kos is my best bud. Every second person described her as their best friend,” said Campbell.

“She just had this way of listening unconditionally to people and offering the most wise support, and then the way that she lived her life just with total joy, and on her own terms to a large degree, she accomplished incredible things.”

Campbell said he is beyond grateful for the care his wife received in her final days, from the rescue crews to STARS to the staff at the Foothills hospital in Calgary.

“There was just love and dignity through the whole process.”